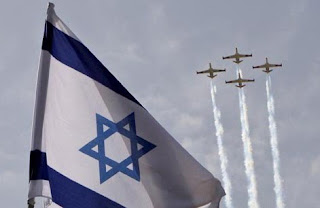 Prime Minister Benjamin Netanyahu of Israel seems to have secured enough votes from his Security Cabinet to approve a US-backed settlement freeze which is suppose to break the current impasse in the peace negotiations with the Palestinians. The Washington Times reported that Mr. Netanyahu brought the proposal before the Cabinet with “great determination” to secure a positive vote. According to theNew York Times, President Obama commends Mr. Netanyahu for taking such a constructive step –“it’s not easy for him to do.”

From these descriptions, one is led to think that Mr. Netanyahu is making quite a noble effort in the name of peace by accepting the harsh terms of the proposed freeze. Hardly. For a mere 90-day freeze on construction in the West Bank – Jerusalem is excluded from the freeze – Mr. Netanyahu is being handed a goodies basket of diplomatic and security guarantees from the US. The deal is incredibly lop-sided especially considering the widespread opinion internationally that Israel is violating international law by continuing settlement construction.

The proposed deal, negotiated by Secretary of State Hillary Rodham Clinton, means Hanukkah has come early for Mr. Netanyahu. In exchange for a one-time-only 90-day settlement moratorium, Israel will receive 20 F35 Jets worth $3 billion, a promise that the US will veto any future Security Council resolution that recognizes Palestinian statehood in the West Bank, Jerusalem and Gaza without Israeli agreement, as well as assurances that the Obama administration will not press for any further settlement freezes. Yet supposedly this was “not easy” for Mr. Netanyahu to accept.

The effect this deal will have on the peace process is questionable. The effect this deal will have on broader peace and security in the Middle East is unfortunately clear. The new F35 Joint Strike Fighters Jets that are part of the deal have not yet even been deployed to US forces. Funneling more highly advanced arms into the Middle East, while a welcome boon for US arms exporters, will only fuel the upward spiral of military spending and the Middle East regional arms race. Meanwhile, despite showering Israel with gifts, the Palestinian question will in all likelihood still remain unresolved once the 90-day freeze is over.