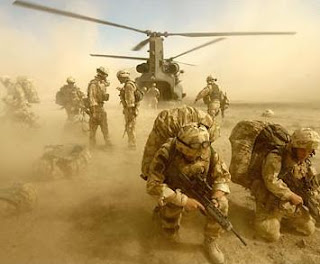 Why we should view the discovery of Afghan minerals with a critical eye. Read the original news story on our website.

A New York Times report has drawn attention to the Pentagon’s discovery of enormous mineral deposits in Afghanistan said to be worth nearly $1 trillion. Although high-level Pentagon officials and some Afghan officials have optimistically discussed the potential these resources hold for the Afghan economy, history indicates that the minerals may take the country down a less inviting path.

There are three reasons why the discovery of these resources does not bode well for Afghanistan:

1. The Pentagon is in charge.

According to the Times report, the Pentagon discovered that the Soviet Union had conducted geological surveys when it occupied Afghanistan in the 1980s. Promising preliminary results sparked the Pentagon’s curiosity, and it used high-tech military equipment to survey the country and eventually make the discovery.

Even if we concede that military equipment was instrumental in the discovery of the vast reserves, it is difficult to understand why the Pentagon has maintained control over plans to exploit the minerals. The Pentagon’s expertise and interests are military in nature: what place does the Pentagon have in Afghanistan’s economy?

The Pentagon has apparently sought the support of the U.S. Geological Survey and hired consultants to develop Afghan minerals management capacity, but U.S. military officials have not indicated when they plan to complete these preparations. If the Pentagon’s goal is to help rebuild Afghanistan’s economy with some security objective in mind, then it should hand over the development of these resources to the Afghan government and internationally-approved experts.

Anything less would suggest a link between Afghanistan’s resources and the U.S. military establishment. Critics of the Afghan mission might use the Pentagon’s interest in minerals to support their long-standing claim that the mission is proof that the U.S. uses its military in pursuit of resource control.

2. Opposing superpowers may clash once again in Afghanistan.

In the 1980s Afghanistan was a Cold War battleground where two superpowers vied for global supremacy. In that superpower chess match, perceptions mattered. On December 25, 1979, the Soviets invaded Afghanistan based largely on the false notion that the U.S. was planning to encircle the USSR from the South. President Carter pledged to robustly defend U.S. interests in the region, mistakenly believing that the USSR was beginning a new phase of expansionism.

Perceptions are equally important today, but the players are different.

American officials are apparently already tense over Chinese interest in Afghan minerals – not to mention its investments in natural resources around the globe. However, the longer the Pentagon remains in the driver’s seat on Afghan minerals, the more China may perceive a threat to its economic interests in its backyard. Washington may in turn perceive a Chinese defense of its influence in South-Central Asia as an affront to a decades-long U.S. commitment to Afghanistan. Under these conditions a majority stake in Afghan resources could become as symbolic as it would be financially lucrative. History suggests that another convergence of competing superpowers in Afghanistan could be catastrophic.

3. The conflict could become a whole lot more difficult to resolve.

From Sierra Leone to Colombia to the Democratic Republic of the Congo, the discovery of abundant natural resources like diamonds, emeralds and coltan have raised the stakes of complex ethnic and ideological conflicts. After the discovery of natural resources and in the absence of a strong, neutral and disciplined central government to enact appropriate legal oversight, warring parties have exploited natural resources to fund their campaigns of violence. As multinational corporations, foreign governments, domestic factions, and corrupt politicians have joined the fray in search of wealth and power, parties to the conflicts have been increasingly motivated by wealth. As a result of this potent combination of greed and grievance, conflicts have become more deadly and more intractable.

Afghanistan is plagued by extreme ethno-political division and by rampant corruption. Taliban, rival warlords, and Afghan officials already leech off the opium produced by desperate farmers. Given how much an illicit, underground trade has shaped the conflict in Afghanistan, there is no telling how much $1 trillion-worth of poorly controlled licit minerals might intensify complex relationships between rival ethnic groups, competing social factions, corrupt politicians, organized crime, and international terrorist organizations.

Theoretically, the value of these resources means that things could go very well for Afghanistan. Countries like Norway have successfully and independently managed newly discovered natural resources by making sound investments in sources of stable, long-term economic growth. If Afghanistan can control corruption and neutralize the incentives for personal gain, there is hope that it might translate these newly discovered resources into a stronger, more secure future.

If the Pentagon is going to play a role in the development of Afghanistan’s minerals, U.S. politicians must demand transparency and accountability from the military. If the Pentagon’s operations in this area are limited in both time and scope, with firm but realistic deadlines for addressing ethno-political conflict and corruption, the people may benefit.

History does not suggest such an outcome. We cannot avoid the dangerous potential of this discovery unless we are mindful of the historical, political, and economic forces at play.