Posted in: Ecology | No comments 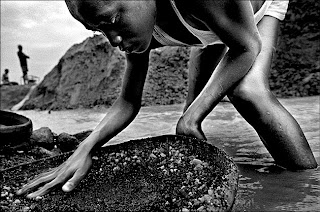 “I’m used to seeing diamonds shiny and in a box.“ At least now we know why Naomi Campbell gave the “dirty looking stones” to the Nelson Mandela Children’s fund. They just weren’t shiny enough.

Yes, like many, I also watched Campbell testify before the Special Court for Sierra Leone Court last week. I had routinely switched on CNN and found myself in the middle of a live broadcast of Campbell’s account of what happened that midnight in September 1997, in the Cape Town home of the then South African President Nelson Mandela.

It was quite on surreal to watch Campbell – a British supermodel of Chinese Jamaican descent known for her unique look, but also her anger-management problems – testify before an international court in a case against former Liberian President Charles Taylor, who has been charged with murder, rape, mutilation and sexual slavery during wars in Liberia and Sierra Leone. The prosecutors had asked the UN-backed Court to subpoena the British supermodel in order to link the Liberian former president to ‘blood diamonds’ which he allegedly received from the Sierra Leone’s rebel group Revolutionary United Front (RUF) in exchange for arms and munitions.

In the end, Ms. Campbell, the defense counsel, the lead prosecutor, and the court’s presiding judge managed to put up quite a show. Campbell revealed that she received some “small, dirty looking stones” in her room from strange men, that she had “actually never heard of Liberia at that time”, and that her appearance before the Court had been “a big inconvenience to her.” Then there was the embarrassing dispute between the lead prosecutor and the judge on whether Campbell was actually the Court’s or the prosecutor’s witness. It almost seemed as if both realized that Campbell’s testimony had actually been a waste of time and that it had only served the huge media frenzy surrounding Campbell’s appearance before the Court.

Campbell’s testimony attracted an excess of mainstream media to the tiny Dutch city of Leidschendam – a city that no one outside the Netherlands had ever heard of – to cover the matter. In addition, CNN, among other networks, provided a live broadcast of Campbell’s testimony for over an hour and a half. After actress Mia Farrow – another  big star – testified before the Court last Tuesday, CNN even decided to interview the US Ambassador at Large for War Crimes, Stephen J. Rapp, to clarify matters.

This attention on Campbell’s testimony has been extremely disproportionate compared to the scarce media coverage of the Charles Taylor case in the previous years. This “celebrity meets war crimes suspect incident” seems to be very unfortunate for the victims of the Sierra Leonean civil war or victims of any ongoing armed conflict in Africa. Guardian blogger, Marina Hyde, has characterized it perfectly by stating that we should “hope that Janjaweed militia are making a pitch for posterity by sending baskets of muffins to Lindsay Lohan, because if and when they are ever brought to justice, they sure as Shirley aren’t going to make the major bulletins without that kind of news peg.”

Soon after Campbell’s show performance, the Court resumed with the continuation of the evidence of Issa Hassan Sesay, the convicted former interim leader of the RUF, which Mr. Taylor is accused of receiving blood diamonds from. CNN, however, had already shifted its focus to other important news.