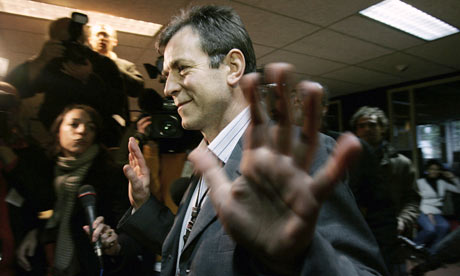 It could have been a fantasy scene from The Office. The chief executive of a multinational conglomerate best known for Post-It notes and Scotch tape sat trying to doze on the uncomfortable furniture in a meeting room above a factory, as angry workers held him hostage. The staff stood guard all night, drinking the coffee machine dry and plotting their revenge on the injustices of the workplace. The boss was allowed out only for toilet breaks. But staff dutifully brought him trays of meals from the canteen, including mussels and chips.

France is braced for a wave of such "bossnappings", as desperate staff take desperate action. Mass layoffs blamed on the financial crisis have seen the protest movement splinter into spontaneous hostage-taking at plants and factories around the country. Chief executives arriving from Paris to announce redundancies find themselves barred from leaving. It is "our only remaining bartering tool" one union leader said.

France has a history of bossnappings dating back to May 1968 and the 1970s, when executives were held hostage in the struggle for rights. Today’s demands are more mundane: hostage-takers range from single mothers to the nearly retired – they want jobs, proper pay and no brutal layoffs. The two "bossnappings" this month are the latest examples in a rise in radical gestures that has seen members of the public stage commando "picnics" in supermarkets, feasting from the shelves in revenge against multinationals, shouting "we will not pay for your crisis".

Early yesterday Luc Rousselet, the director of 3M’s French operations, was released after two days and nights. He said he had been treated well and that the employees "had more to complain about than I have". But staff were angry at union leaders for agreeing to his release. The only gain was a promise by the company to go back to the negotiation table over redundancy deals.

"If we did it again now, we would hold him for longer, definitely," said Patrick Hachaguer of the communist-leaning CGT union at the south-west Sony factory in Les Landes, where another executive was taken hostage for 24 hours this month over severance packages. "Holding him for a few more days would have allowed us to get more. The advances we made were minimal, but we wouldn’t have got anywhere without kidnapping the boss."

Hachaguer said their action had not been premeditated; staff had just invaded a meeting. "Suddenly one said, ‘I hope you have an open return ticket and your toothbrush with you’ and it happened from there," he said. The chief executive of Sony France and his HR director were held in a meeting room overnight. "We gave them water and sandwiches, but they refused to eat," Hachaguer said. "Some people on guard duty brought sleeping bags, but they didn’t use them. The staff were up all night, singing, laughing, eating together as we occupied the plant. It was a sad moment, but we pulled together.

"Unfortunately I think protest movements are going to only get more virulent, more violent," he added. "People are desperate, they feel companies are staying rich while stealing our jobs. People could start setting fire to factories."

France’s mistrust of the bosses and globalisation has spiralled with recent scandals over huge executive bonuses amid bailouts. The biggest fear is unemployment, which is growing at its fastest rate in more than a decade.

Guy Groux, a specialist in industrial action at Paris’s Sciences Po university, said France was facing two movements. In big cities there were organised mass street protests against the president’s handling of the economic crisis. And in the provinces there were "parallel, sporadic and increasingly radical movements prompted by layoffs".

Claude Guillier of the CPE-CGC union in Loiret, where the latest bossnapping took place, said: "It’s going to be very difficult as we go into May and June, these things generally deteriorate in the spring in France. Things are getting more radical, with a real note of anger and violence. But this crisis is global and this type of thing could spread to Greece, Italy or the UK."

Iz – Over the Rainbow