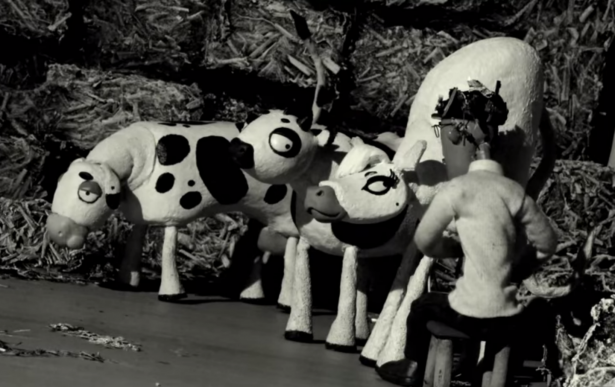 The film is about an episode of creative, constructive, and non-violent resistance in Beit Sahour, a Christian town near Bethlehem during the First Intifada.1 In 1988, activists in the occupied town wanted to boycott Israeli milk, and instead produce it on their own. They went to a “peacenik farmer” on a nearby kibbutz, and bought 18 cows, one of which was named Goldie. Then they sent a local student to the United States to learn the arcane techniques of dairy farming, and began to produce their own milk.

Which caused the Israeli occupation authorities to, yes, Have a cow.

Why? Because, for Israel, it is anathema for Palestinians to create any –  even the most elementary – institutions that would support their self-sufficiency and independence, and undermine their subjugation to Israeli authority. Think that’s an exaggeration. Here’s what the Israeli military governor said:

We had a strict directive on dealing with those who formed the neighborhood committees with all the necessary force, and all legal means at our disposal in order to control them so as to prevent the possibility of their setting up an administrative apparatus which was ultimately designed to replace our own.

And the cow project had indeed created a sense of accomplishment and energized the Beit Sahour community.  As Jalal Qumsieh, who bought the cows, said: “The moment I saw the cows at the farm, I felt as if we had started to realize our dream of freedom and independence.” The colonial authorities can’t have that. Qumsieh recalls, “word-for-word,” the Israeli military response: “These cows are dangerous for the security of the State of Israel.”

Cut to today, where the Palestinian filmmaker, Amer Shomali, who had been to many festivals throughout the world, is prevented by Israel from getting a visa to attend the premier of his film, because he, like the cows, is a “national security threat.”2  Gotta keep him penned in.

There are just so many security threats that must be denied to Palestinians, like 4G phone service and digging a well:

So Amer took a more circuitous route, going to Amman to get a visa from the American Embassy there. Unfortunately, he couldn’t get one there, either, because their “visa machine was broken” or something. Though Amer suspects “there’s a kind of coordination” between Israeli military and American diplomatic authorities regarding visas, he believes the Americans have the best intentions, and will give him a visa in time to get to Los Angeles for the next screening on June 19th. When asked what the “technical difficulties” in the Amman embassy were, he said: “I have no idea. Something with the system, system collapse. I don’t know. I have no idea. But they were smiling when they said that, so I have—I believe they have good intention.”

Amer does not think this “system collapse” is a cowardly and despicable ruse by the Americans to hide their connivance with Israel in preventing a real Palestinian from accompanying and amplifying the real story of creative resistance his film tells to American audiences.

Amer is a more trusting soul than I. We’ll see.

As Julia Bacha, Brazilian filmmaker and impact producer of The Wanted 18, says:

We really want communities, particularly here in the United States, to start thinking about what are the stories that we are hearing from the region and what are the stories about resistance that arrive to us. I think historically we have been told that Palestinians only used violence to achieve their aims, when in fact there’s a very long history of civil disobedience and nonviolent resistance, which this film is one example of. And for Amer to be able to tell this story with some humor, we hope we’ll be able to attract more people to join.

That, the Israeli authorities and their American accomplices know, is a real threat to their ongoing enterprise of milking sympathy for Israel by demonizing and erasing Palestinians.

Did I mention it’s the Human Rights Watch Film Festival he was prevented from attending?

1 I hate to emphasize that word, but I think it’s unfortunately the case that many Americans need to be reminded that all Palestinians are not Muslims, and Muslims are not the only victims of, and fighters against, Israeli colonialsm.

2 He was actually refused permission to travel from Ramallah to Jerusalem, where he would get a visa from the American Consulate. Travelling from the West Bank is very complicated, and very strictly controlled by Israel.
Here’s how Amer tells it:

Basically, I applied for an American visa at the American Consulate in Jerusalem. And in order to get to Jerusalem, you need to cross a main checkpoint blocking the road between Ramallah, where I live, and Jerusalem, where the American Consulate is. And to get that permit, you need to apply for the Israeli army. And my permit was rejected for security reasons. And it’s not a special case, like there’s tens of thousands of Palestinians, young Palestinians, who are labeled as a security threat to the state of Israel. And it’s quite frustrating. Jerusalem is just 25 minutes away from here. From this studio, it’s like 10 minutes. But you still can’t reach there. The American Embassy in Jerusalem does not offer any facilities for Palestinians who can’t get there. And they even ask you, even if you thought of sneaking to Jerusalem illegally, without a permit, to attend your interview, they will ask you, “Where is the Israeli permit?” as if there’s a kind of coordination. Anyway, I missed my appointment—