Posted in: International Relations | No comments
Since early this year, Syria has been rocked by pro-democracy protests engendered by domestic problems and the toppling of autocratic leaders in Tunisia and Egypt. The Syrian government’s response to these protests has been violent. European countries and the US have advocated for a UN Security Council resolution condemning Syria’s human rights violations. However, Brazil, India and South Africa (3 of the 10 Elected Members) have threatened to vote against any such resolution. The UK, France and the US (3 of the Council’s 5 permanent members, often referred to as "the P3") have condemned the emergent powers for acting in their own self-interest. Such a claim, however, ignores the P3’s own biased use of international law as a framework to further geo-strategic interests.


The Situation in Syria 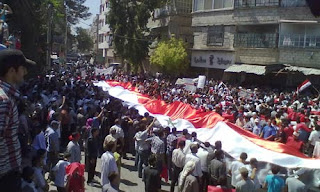 Syria has operared under Emergency Law since 1963, effectively suspending most constitutional protections for citizens and resulting in sweeping powers of arrest and detention for the security forces. The current Syrian president Bashar al-Assad succeeded his father Hafez al-Assad, who was in office from 1971 to 2000. Whilst citizens are entitled to vote for or against a presidential candidate, there is no open multi-party voting system. Further, the imposition of neo-liberal policies has resulted in worsening conditions for the poor. The erosion of subsidies for basic goods and agriculture has negatively impacted local industry. At the same time wheat is trading at record prices. Unemployment, especially amongst the youth, has continued to rise. Such factors, together with examples from successful Tunisian and Egyptian uprisings, have brought people to the streets of numerous Syrian cities in predominantly peaceful protests. The Syrian government has sought to cling to power by granting small concessions but primarily through the use of force. Syrian forces have fired upon protestors. It is estimated that 1,400 protestors have been killed. Numerous others have been detained. Youths have been arrested for writing pro-democracy graffiti. UNICEF has called upon Syria to investigate the reported killing of children. Amnesty International has received reports of Syrian forces firing on ambulances carrying the wounded and on trucks carrying families. Gross human rights violations have been, and continue to be, committed.

Syria in the Security Council and the Libyan Precedent

At the beginning of June, 2011, the UK, France, Germany and Portugal distributed, amongst the fifteen Council members, a draft resolution condemning the systematic human rights violations by Syrian authorities.

Reuters reported that changes were made to the original draft resolution to make it look less like a prelude to military intervention. In the event that the draft resolution is put to a vote, Russia and China are likely to use their veto against it due to close historic and economic ties with Syria. Brazil, India and South Africa have expressed legitimate concerns with the draft resolution and have also threatened to vote against it. They have been chastised by the P3 and some NGOs for acting according to national interests and being obstructionist. No one wants the human rights abuses to continue. However, there is a concern that if Syria does not comply with the resolution (and it is unlikely to), non-compliance will be used as a justification for an escalation of Western involvement in the country – whether permitted explicitly by the resolution or not.

Brazil, India and South Africa often cite UN Security Council Resolution 1973 (March 17, 2011) on Libya as justifying their concerns. Following attacks by the Libyan government on pro-democracy activists, this resolution called for the Gaddafi regime to undertake a ceasefire and end the violence and attacks against civilians. The resolution permitted “all necessary measures” to protect civilians and imposed a “no fly zone” in Libya.

Brazil and India abstained in the Council vote on resolution 1973 whilst South Africa voted for it. However, representatives from all three countries have now expressed concern that, rather than protect civilians, NATO forces in Libya are primarily concerned with regime change. Whilst there is no doubt that Gaddafi has been a violently repressive leader, regime change is not authorized under resolution 1973. Using the resolution on Libya as an example of NATO forces acting outside of a UN mandate, Brazil, South Africa and India have questioned whether, in the event that Syria does not comply with any future resolution, NATO forces will again act outside of the UN resolution to intervene militarily in Syria.

The P3 have vested interests in both Libya and Syria. The countries are strategically placed – the first in North Africa and the latter in the heart of the Middle East. The ultimate aim of a NATO led military intervention would probably be to instill a regime friendly to Western interests.

The problem is also one of selectivity. Why are Western countries eager to take action in Libya, Sudan and Syria but not in Bahrain, Yemen or the occupied Palestinian territories where human rights abuses are also occurring? The answer usually given by the P3 is that each country is different and thus necessitates a different response. However, an examination of recent cases highlights that the P3 only act when their interests are at stake.

Richard Falk has pointed to double standards in the use of the “Responsibility to Protect” doctrine, which provides the basis of the Libyan resolution and which drives the current draft resolution on Syria. The principle is based on the idea that the international community has a responsibility to ensure that human rights are respected across the globe.

The P3 argue that they are acting with leadership and responsibility in calling for an end to human rights violations in Libya and Syria. At the same time, they portray Brazil, India and South Africa as irreverent “less-experienced” members –emerging powers that all want to become permanent members of the Council but who are refusing to take an important stand. But, surely, real leadership and responsibility would look to ensure the universal application of human rights norms in a manner that prevents all abuses.

Brazil, India and South Africa often act according to their own interests and should not be idealized as beacons of progressive resistance to Western imperialism. However, it is ridiculous to contend that the US, UK, France and others have not used the UN as a forum to further their own geo-strategic ends. The double standard is clear: Western countries promote the norms of international law when they correspond to geo-strategic interests, but otherwise neglect them.

Falk has said that the rule of law depends, for its legitimacy, on treating equals equally. If equals are treated unequally then what is called the rule of law is really just another version of the rule of power. Real responsibility would look to ensure that the human rights of all civilians were protected with the same enthusiasm – whether in Palestine, Bahrain or Syria. Responsible countries should not support any country engaging in policies that violate human rights.

The structure of the UN Security Council (with veto powers and permanent membership for the US, France, UK, China and Russia) is a form of constitutional recognition of double standards. Although the veto power constitutes an accommodation to geo-politics, it also inhibits the application of the rule of law on a global level.

Why Should War Criminals Operate with Impunity?

Military and Economic Power Once Again Fail to Produce Happiness

Who Speaks for the World?