The NYT and the art of selective reporting: Women suicides by fire in Afghanistan 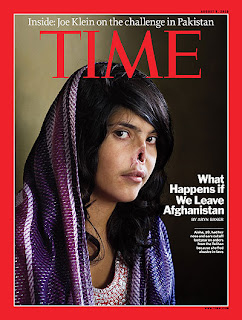 Last August, Time Magazine used as its cover a shocking picture of Aisha, a young Afghan woman who was sentenced to have her nose and ears cut off by a Taliban commander. Next to the picture was the caption “What Happens if We Leave Afghanistan” – no question mark. Time’s cover was seen by many as a thinly veiled attempt to justify the war in Afghanistan by way of the long debunked argument that the US-led intervention is about protecting women. Although the situation of Afghan women has certainly not markedly improved since 2001, they still serve as a convenient alibi for US war efforts in the region.

This was illustrated again this morning by an article in the New York Times. “For Afghan Wives, a Desperate, Fiery Way Out” might be less obvious in its politics than Time’s cover, but its take on the plight of Afghan women is very similar. The article focuses on the high number of women who each year attempt to commit suicide by setting themselves on fire. Most women resort to this extreme act after years of abuse by their husband and their family. In some cases, the burns are actually inflicted by relatives, as a way to get rid of a woman who has “stained” the family’s honor.

No doubt the fate of these women is terrible. However, the Times’ coverage of the situation is severely lacking. Not once in the article does the author mention that the US has been occupying Afghanistan for almost 10 years now. There is absolutely no examination of how this might affect the situation of Afghan women. While the article states that women are attempting suicide to escape “from poverty, from forced marriages, from the abuse and despondency,” it is careful not to add “war” to the list of ills affecting women in Afghanistan. The fact that women are often the first victims of conflict – which robs them of their husbands, confines them to their home, forces them to move as troops advance, and often kills them – never seems to cross the author’s mind. The suffering of Afghan women is not worth reporting if it’s inflicted by anyone else than those backward Afghan men. “Violence in the lives of Afghanistan’s women comes from everywhere: from her father or brother, from her husband, from her father-in-law, from her mother-in-law and sister-in-law” – but certainly not at the hands of US soldiers.

Tellingly, when the article mentions that the number of burn cases is “up nearly 30 percent from last year,” it never links this increase to the escalating US war efforts in the region. The addition of 30,000 US troops in Afghanistan last year appears nowhere. It’s as if the lives of these women and the US military intervention were happening in two parallel universes.

This selective reporting allows the author to subtly reinforce the idea that Afghan women need protection. By pointing to the gruesome fate of these women, the article implies that they’re in need of a benevolent benefactor that will “liberate” them. But the US intervention so far has had the opposite effect. If anything, it has made life more difficult for these women. While the article mentions that poverty is one of the lead causes of suicide, it evades the question of how women’s livelihoods have been affected by the war. By omitting this fact and others, the Times seems to be suggesting that the solution to the plight of Afghan women is more war, not less.