Following a high-profile accident involving a salaried worker filling in at a factory for a worker on strike, John Deere management is trying to prevent reports of similar incidents from reaching the general public. Company executives, concerned about “reputational risk” on social media, have instructed employees that accident reports are “confidential” and must not be shared with the public, according to a recording of one executive and a slide deck obtained by The Intercept.

After John Deere’s roughly 10,000 unionized factory workers overwhelmingly voted to strike, the company turned to nonunion salary employees — many of whom lack the same training as their wage-earning factory counterparts — to fill the vacancies. On October 15, Jonah Furman, a reporter for Labor Notes, posted an internal Deere slide depicting a salary worker crashing a tractor into a utility post. The post quickly went viral on Twitter, and since then management has avoided putting discussion of safety matters into writing.

“Today and going forward, you guys, I won’t be able to share any slides,” factory manager Rosalind Fox told employees at John Deere’s Des Moines Works in Ankeny, Iowa, in a video meeting on October 19. “What we’re going to do, I’m just going to talk to you verbally here because we’ve had situations … where people are screenshotting, and it’s getting out into the media, and we don’t want to do that.”

“We will continue to do these weekly huddles now virtually, probably without slides, to prevent things from getting out into the social media platforms,” Fox continued.

The audio of Fox’s comments is below:

“John Deere places the utmost emphasis on maintaining a safe work environment in our factories,” Jennifer Hartmann, director of public relations for John Deere, told The Intercept in a statement. “John Deere has established protocols in place to ensure safety procedures and updates are communicated effectively. Managers are free to adapt their communications techniques – whether choosing to use email or in person meetings – at their discretion.”

Workers in Iowa, Illinois, and Kansas have now been on strike for 12 days. Strikers are dissatisfied with inadequate pay after bruising work schedules as essential workers during the Covid-19 pandemic and amid record profits the manufacturer reported this year. Deere management has also been trying to limit picketing at the plants, filing injunctions as the negotiations with United Auto Workers continue.

Limiting distribution of accident reports represents a departure from usual practice. “They usually publish them in written form similar to that one about the tractor hitting a post,” one salaried employee in Ankeny, who asked not to be named to protect his job, said. “They would normally bring up specific cases at the start-up meeting so everyone knows what happened and what corrective actions there were, at least if it happened locally.”

An internal slide deck shared with The Intercept by a worker from a second facility in Waterloo, Iowa, and marked “confidential” confirms the directive. “How will near miss information be communicated?” a Q&A slide sent to salaried Deere employees on October 20 asked. “Near miss” refers to accidents in which worker injuries are not sustained. “This information is confidential and should not be shared outside of Deere,” the slide answers. 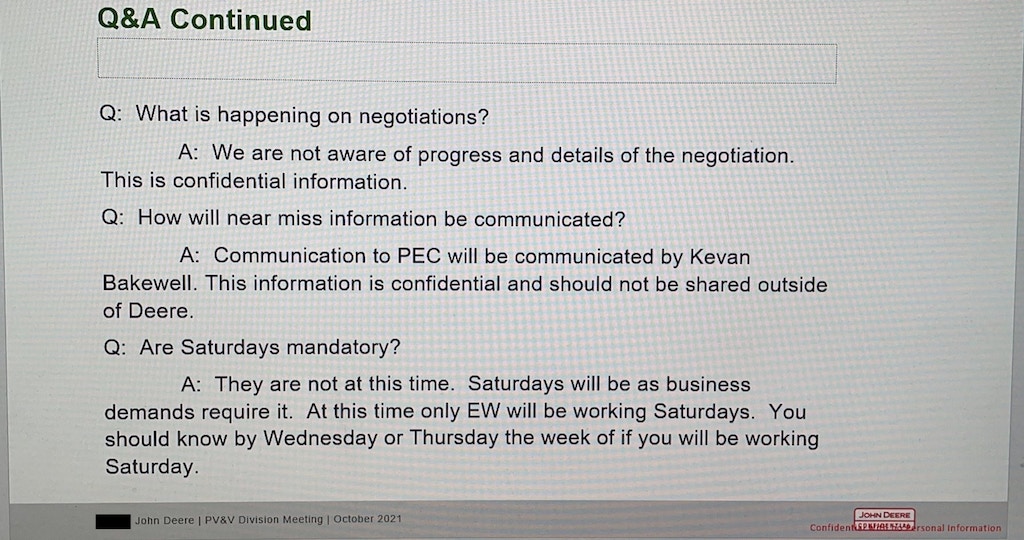 Image obtained by The Intercept

The Ankeny employee voiced frustration with the lack of transparency. “They aren’t even updating us with ‘near misses’ like they normally would for fear of it leaking out,” the employee said.

Many of the nonunion salary workers sympathize with the strikers, the two workers said — and not just out of solidarity for their fellow workers, but also concern for their own safety. Both had heard of subsequent accidents, but details had not been shared with them. “We’re soft desk jockeys getting thrown into hard labor with little training,” the first worker said. The Waterloo employee, complaining about the lack of training, put it more bluntly: “We are gonna get killed.”

Fox herself alluded to the lack of training while praising employees new to factory work for “stepping up”: “I can’t express to you how humbling it has been for me to see employees just stepping up in every way. And obviously with us starting training folks last Thursday and Friday, we’ve had new people coming to Des Moines who’ve never worked in a factory before, and they are showing up for us every day. We’ve got folks who are not new to Des Moines but new to operations and manufacturing who have been stepping up every day.”

The amount of on-the-job training, or OJT, varies, as one slide provided to me states: “Training will vary by facility and OJT will occur once assigned.” One employee described training that was just five hours of virtual instruction encompassing job and safety protocols. Other employees who reached out to The Intercept claimed that they had no training at all. And all Deere employees I interviewed for this article agreed that the training was inadequate.

“If Deere was looking for a way to piss everyone off and make sure that the salaried people were standing in solidarity with the UAW rank and file, this was a great way to do it,” the Ankeny employee said. “Nothing like sending your pampered front office people to see the conditions wage people work in first hand.”