By Johanna Bozuwa and Janine Jackson

Janine Jackson: It’s difficult to grasp the distress and dystopia of Californians right now, on alert for the next wildfire or power shutoff, learning their kid’s school is closed, or they may have to move house for a while. But how much more disconcerting to see media coverage referring to their situation as the “new normal.” USA Today at least found one Santa Rosa woman who said she is not willing to accept that idea. But what could journalism be doing, to not just give context to the factors behind California’s current crisis, but to illuminate different ways forward that are so obviously called for?

Johanna Bozuwa is co-manager of the Climate & Energy Program at the Democracy Collaborative. She joins us now by phone from Washington, DC. Welcome to CounterSpin, Johanna Bozuwa.

Johanna Bozuwa: Hi, thank you so much.

JJ: Can we just get some informational grounding here? The power outages that we heard about earlier this month were planned by the utility company Pacific Gas & Electric, because they were concerned that power lines might trigger wildfires in high winds, as in fact they did last year, leading to the most deadly California wildfire on record, 85 people killed, which in turn led to PG&E declaring bankruptcy.

But my question is, not being facetious: Is this the plan? You know, going forward? Is it PG&E’s idea that they will shut off power whenever conditions are such that fires might be sparked—which, due to climate disruption, is going to be an awful lot of times?

JB: There’s a lot of history that’s here, in terms of PG&E not investing in its grid for so many years, and really putting shareholder profits ahead of the infrastructure that we now have, which has created this concept of the “new normal.” But it also doesn’t have to be. I mean, having these power shutoffs  again and again? Governor Newsom has even said, these are incredibly not surgical. They are doing blanket shut-offs, because they’re afraid of liability.

But they’re also not providing the infrastructure that communities need to actually make it through these. So their phone lines are off, you can’t get on to their website, and there’s only a generator station for every county. And so that’s just showing that this is not just them taking precautions, this is them severely mismanaging a situation in which people are losing their power, and losing access to maybe life-sustaining medical apparatuses as well.

JJ: And you point to history. They aren’t just any utility that is being forced to deal with climate disruption; there’s more that we should know about the role they’ve played vis-à-vis climate change, isn’t there?

JB: Oh, yes, definitely. The Energy and Policy Institute had a really important exposé. We hear a lot about “Exxon knew” and “Shell knew” on the news. But utilities knew too; they were part and parcel to the climate disinformation campaigns that have happened in the past and have sowed disinformation, and PG&E  was a part of that as well. So PG&E is not a good actor in this situation; they are the ones that were able to make money off of fossil fuels for so many years, and stopping action on climate change for years as well. And now they are paying the price, with their own infrastructure that they failed to invest in so that it was ready for the new climate that they had, in part, given us.

JB: Yeah, absolutely. So I advocate that PG&E should be transitioned into public ownership, because it can eliminate some of those warped incentives that are associated with monopoly, investor-owned utilities that operate our energy systems. And we can move towards a situation in which a public good is provided by a public service. By moving to a public institution, we are going to have, hopefully, a more accountable utility, whose shareholders and stockholders are us. It is the people who are living in California, and not the shareholders who are hundreds of miles away.

You talk a lot about the media; it’s been really interesting for me to look at some of the coverage that’s been happening around the investors that are circling PG&E right now. They’re saying, “Oh, we’ll take it over,” these venture capitalists like Paul Singer, who has been in bed with the Koch brothers for years, investing in anti-climate sentiments. And we see the same thing with Berkshire Hathaway, which is another major utility company that has been trying to stop distributed solar across the United States, just the type of resiliency we need for California.

And similarly, San Jose, one of the biggest cities that PG&E provides service to, is saying, actually, you know what we should do? We should create a cooperative utility so that it is beholden to the people of California, and we’re taking over PG&E at the statewide level.

JJ: As we discussed when we talked about public banks on this show with Trinity Tran a few weeks ago, the word “public” isn’t like pixie dust; it doesn’t automatically make things work in a better way. But public utilities would have certain criteria about being democratized, about being decentralized, about being equitable. It’s not just a goal, in other words, but a way to get there, and who is involved in the process.

JB: Absolutely. It’s not a silver bullet, but it does provide us this opportunity to have more recourse. And the other thing is, we’re building this thing from scratch, right—or not from scratch, there is a history of public ownership in the energy sector. But we have the ability to design into that institution things like decentralization, things like equity, things like a democratized system, and build upon what we’ve seen work in the past, and also where we’ve seen public utilities historically fail. This is a huge opportunity for California to create an energy system that’s rooted in climate justice, that’s rooted in the realities of the changing climate, and how they’re going to ensure that they actually are creating a resilient California. 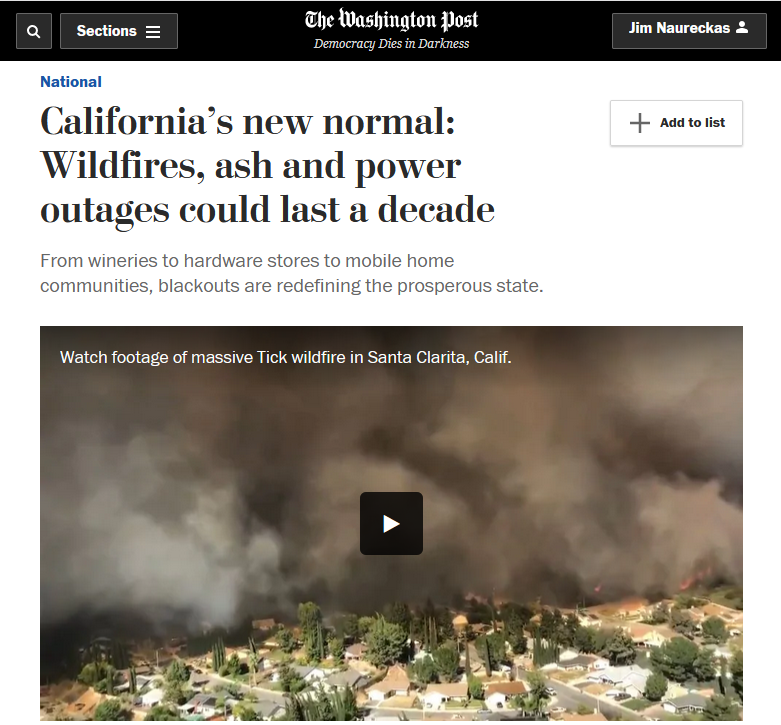 JJ: Finally, I was struck by this line in the Washington Post. It said:

Even a year ago, it was unthinkable that California—one of the most prosperous states in the country, which has spearheaded climate initiatives and taken the national lead in electric vehicle adoption—would be put in a situation where whole neighborhoods have a choice between sitting in the dark or relying on noisy gasoline generators to keep life going.

And I thought, really? Unthinkable a year ago? Maybe by you, but I’m pretty sure folks were thinking it.

What would you like, just finally, to see maybe more of, or less of, in terms of media coverage of this set of issues?

JB: I would love to hear from people more often actually discussing what something like public ownership could look like, really interrogating the models of utilities and the incentives that are there, which we’ve seen a little bit of. But really, then, defining what these alternatives could look like.

JJ: We’ve been speaking with Johanna Bozuwa, co-manager of the Climate & Energy Program at the Democracy Collaborative. They’re online at DemocracyCollaborative.org. Her article, “Pulling the Plug on PG&E,” can also be found at TheNation.com. Johanna Bozuwa, thank you so much for joining us this week on CounterSpin.

JB: Thank you so much.

The case for public ownership of the fossil fuel industry

Sanders Calls To Seize the Means of Electricity Production

The politics and potential of the Green New Deal

PG&E: Don’t Break it Up. Take it Over