The industrial-capitalist-technological system is characterized by perpetual growth through excessive production, relentless marketing and public relations to expand markets and demand through consumerism.[1] In the process, novel ‘needs’ are manufactured and the boundaries and norms of comfort and convenience are continually reshaped.[2] In this system relatively few technologies are socially necessary, and their manufacture and multiplication is exacerbating ecological destruction and global social injustice. Because it is organized around the maximization of profit, this system foments an ever-accelerating throughput of matter-energy and output of waste.[3] Technological planned obsolescence begets material objects of short functional lifespan but nearly permanent environmental harm, being made of industrial processes and toxic substances that do not return safely to the environment (e.g. plastics, stain-resistant coatings with toxic ‘forever chemicals’, heavy metals).

From an ethical and sustainability perspective, the reigning technological system is fundamentally in-appropriate. Despite wearing the mantle of high-positivist and rationalist science, it bears all the characteristics of a giant Rube Goldberg machine, where solutions, no matter how brilliant in isolation, are applied to either ridiculous ends or a ridiculous complication of means. Each stage of the unnecessary or absurd contraption itself produces a new series of problems requiring further (profitable) technical mitigation, treatment, and ‘externalization’ (i.e. dumping) in turn. Such technologies are of course not just whimsical cartoons, but everywhere apparent in the modern high-tech world. Consider but one example: electricity-powered machines with a huge hidden network of mines, power stations, transmission lines, and complicated devices to mechanically produce hot air and movement at the same time as nature – in the form of sunshine and wind – provides them for free outside, for the purpose of drying clothes.

The same life cycle assessment can be almost endlessly applied to most modern complicated technologies (i.e., those that are mechanized, motorized, fossil-fuel or electricity-powered) and the globalized, capitalist economic system in which they circulate. Technologies under this system, being commodities, are created and organized for the purpose of generating surplus exchange value for profits, rather than use or subsistence value for needs. As Otto Ullrich points out, the vastness of this lifecycle entails an insidious seductiveness, since it disperses, mystifies and socializes its real costs in time and space, causing a “non-intersection between advantages that are privately consumable and disadvantages that have to be borne collectively”.[4] Those disadvantages of high-tech within capitalist globalization today include exploitation and pollution on a planetary scale, costs which are socially paid but nevertheless hidden from the end consumer. Only by way of this accounting legerdemain can complicated high-tech devices appear “efficient” against simple manual tools.

Contrarily, ‘traditional’ (defined here as land-based, peasant) cultures have been marked by ‘subsistence technologies’ that embody a radically opposite set of values and design principles that together constitute a template for the ‘original appropriate technology (AT)’, which find many parallels – with modifications – in the contemporary AT movement.

These principles include, among others: use value over exchange value; social necessity; place-based, hand-made and low- or no-energy; non-polluting; durable but also ultimately safely bio-degradable; democratic and decentralized; and non-alienating (see ‘Ten Principles of AT’, below). Perhaps most importantly, consonant with the insights of social critics ranging from William Morris to Gandhi to Ivan Illich, is the avoidance of technical interventions and superfluous innovations where none are needed, or where their utility may be overwhelmed by their harms: the sufficiency principle, and the precautionary principle, respectively. I would also call this the ‘a-novation’ principle – the application of intelligence and creativity to not-doing, to non-production. As William Morris insisted, “nothing should be made by man’s labor that is not worth making, or which must be made by labor degrading to the makers”.[5] Related to this, in traditional cultures, social relations of cooperation, reciprocal labor and care often substitute for individualized and privatized technical means. In Ladakh for example, villagers traditionally pool their labor to harvest and process everyone’s crops in a staggered fashion, engage in communal shepherding of livestock on a rotational basis, and equitably distribute gravity-fed irrigation water using simple spades and soil under ingenious networks of hand-dug canals and turn-taking. These forms of cooperative labor largely obviate the need for technologies in the first instance, or facilitate the practicality of local AT. 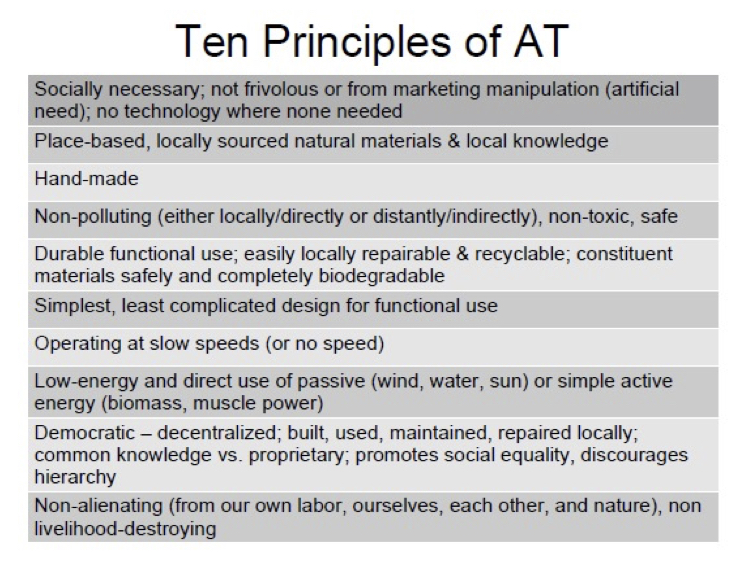 Two Types of AT

Traditional/original AT, based on communal social arrangements, hand-crafted from local, natural materials that cultures have used since centuries mostly for subsistence purposes, satisfies practically all of the principles of deep sustainability. One can think, for example, of traditional collective hand harvesting and processing of crops versus the mechanized harvesting of industrial agribusiness, or the traditional water mill still in common use in villages throughout regions like the Himalayas versus fossil fuel-powered mechanical mills. These traditional mills are constructed of local stone, wood and soil based on ancestral knowledge; communally owned, utilized and repaired; running on non-polluting gravity-fed water; pollution and waste free; operating at relatively slow speeds and low temperatures; and so on. In addition to these attributes – and contra modernist prejudices – traditional tools and crafts are incredibly effective, practical and still relevant today against their high-tech counterparts and replacements, and superior once externalized costs of the latter are accounted for.[6]

What I call modern AT (aka Intermediate Technology) – comprises tools and machines that may use materials from the industrial economy (thus, occasioning some indirect pollution), but otherwise shares many characteristics with traditional AT, especially economic independence, political democracy and social cohesion. Both Gandhi and Illich saw a role for as much industry as necessary to produce, for example, bicycles and manual sewing machines – obviously, with provisos that those industries too should be as small-scale, non-polluting, democratically run etc. as possible; also, some of those industrial materials may be substitutable by biological materials (e.g. bamboo bicycles) and may not therefore necessitate any heavy/intensive industry. Gandhi’s main economic program was for village swadeshi (self-reliance), based on village industries. But he meant something very different by ‘industry’ (e.g., small-scale manual cloth weaving cooperatives such as still exist across much of India), and welcomed “simple tools and instruments and such machinery as saves individual labour and lightens the burden of the millions of cottages”.[7]

Suffice it to say that many modern ATs have been eagerly adopted by traditional cultures, because such technologies graft well onto and enhance the subsistence economy while responding to novel challenges of modernity, and maintaining critical qualities like autonomy and cooperation, even if some of them necessitate entanglement with the cash economy. For example, in Ladakh, such modern ATs as solar cookers and water heaters, rocket stoves, ram pumps, trombe walls and other passive solar building techniques are widespread.

This belies misconceptions of traditional cultures as static and closed; indeed, traditional ATs themselves are the result of centuries of careful refinement and innovation.[8] Still, the chief disadvantage of both traditional AT and modern AT vis-à-vis modern high-tech is precisely in their non-mystifying nature: less privatized convenience borne of cost-shifting. This lack of ‘convenience’, conventionally conceived, and the physical muscle input required in its use have been the very features of traditional tech long denigrated as backward, and a pretext for colonial intervention and domination.[9] This domination continues, as both traditional and modern ATs are being quickly displaced by industrial products and materials, and traditional cultures are eroded by incorporation into the extractive global economy. This is of particular concern at a time when living examples of AT and sustainable modes of social organization are so desperately needed as lighthouses by which to navigate the downscaling of industrial society. A major challenge is saving and reviving them before they disappear, for, as Illich once remarked, the great advantage of a place like rural Guatemala or India is “still being muscle-powered enough to stop short of an energy stroke” of the sort suffered by the over-developed societies.[10]

Isn’t a reversion to simpler, manually-powered AT impractical because of the exertion and labor required? Isn’t praise of traditional AT mere romanticization? To these common objections, one need only recognize the fact that the obsessive pursuit of convenience through mechanization and automation under the banner of technological progress has produced not well-being, but contributed instead to epidemics of both physical and mental illth for individuals, to say nothing of social problems like unemployment, and ecological devastation.[11] The very things we are coming to realize as essential to good health – movement and exercise, social connection and connection to nature, control over our own lives, etc. – are the very conditions being undermined by over-dependence on industrial technologies and the technological paradigm.

Conversely, manual labor using AT, when done cooperatively in groups (thus preventing the labor from becoming onerous for any one person) and in conditions of economic security – conduces to health precisely because of its relative lack of ‘conveniences’, facilitating reasonable and necessary bodily exertion and movement, connection to nature, and alleviation of loneliness.[12] These are the qualities characterizing traditional AT, and in this way ‘traditional’ cultures point the way to a more sustainable and healthier future, if we can accept the lesson.[13]

The modern AT movement, intermeshed with the degrowth movement, is doing exactly this sort of ‘reverse development’, re-peasantization and deliberate in-conveniencing, motivated both by ethical objections to the socialized harms of high-tech, and by practical ones of independence and autonomy, especially from centralized energy grids and fossil fuel oligarchies. The less-visible but more durable advantages – personal, social and ecological – of AT are proving resilient against the hegemony of the dominant system. Some outstanding examples include: L’Atelier Paysan,[14] a French cooperative that works with farmers to design machines and buildings appropriate to the unique needs of small-scale agroecology, in the pursuit of “technological sovereignty”;[15] Maya Pedal in Guatemala,[16] a social enterprise building pedal-powered non-electric bicycle machines for numerous practical household and small farm applications; and Can Decreix,[17] a center for putting degrowth principles into practice, based on low- or no-tech living in France; among many others.

Beyond tools, movements working to rebuild community and decommodify life through projects of sharing and repairing are also pointing the way towards a ‘social AT’: repair cafes,[18] remakeries,[19] tool-lending libraries,[20] and reskilling hubs.[21] Movements politically resisting corporate practices of ‘planned obsolescence’ and criminalization of repair are also important elements of the broader AT shift,[22] as are those focused not on ever more innovation, but rather ‘exnovation’ to dismantle harmful technologies and technological systems that are incompatible with eco-socially just futures.[23]

There is no AT in traditional cultures independent of traditional community-based social arrangements: reciprocal labor sharing and care, mutual aid, and the like. The two are mutually constitutive. Just as sustainability cannot be achieved merely by adding renewable electricity technologies to an otherwise unchanged consumerist-industrial growth economy, neither can AT in isolation make significant impact situated within an otherwise congenitally unsustainable system. Part of the essence of AT emerges from, in and for community life. Unsustainable substitutions are often ushered in on the wake of community disintegration, and cause further such disintegration in turn, because by nature they obviate the community element, privatize the use and shift dependence to global industrial supply chains. AT is therefore not just a matter of tools and artifacts, but requires supportive social and political-economic conditions. For AT to thrive will require transcendence of globalization and capitalism-industrialism and a return towards smaller-scale, more localized, sufficiency economies, and AT will be necessary to enable such economies in turn.

As the dominant techno-industrial system drives the planet over the precipice of ecological catastrophe, and deepens social maladies of alienation (from our own labor, ourselves, other people and nature), the need to downscale, decentralize and de-grow the economy becomes ever more apparent and urgent. The ‘original AT’ of traditional cultures and its contemporary applications and modifications offer important contributions to this pressing task of subordinating the economy and its technologies to social and ecological survival.

This paper was originally presented at the online conference, “De-growth or Reinventing Life: Prospects and Projects”, 4-6 October 2021, by the M.S. Merian – R. Tagore International Centre of Advanced Studies ‘Metamorphoses of the Political’.

Tosepan: Resistance and Renewal in Mexico