The US management of the Covid-19 crisis has been horrible compared to Europe, as the famous chart makes clear. I don’t know if the bar-goers actually know how to read a chart, but that line going up is the US and that is bad, and the line hugging the bottom on the right is Europe and that is much better. 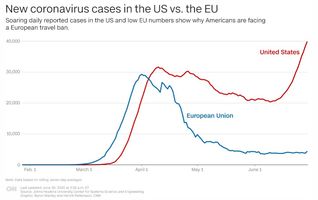 Covid-19 is a proxy for American backwardness. Oh, the U.S. is good at certain kinds of high technology, but in most respects the coronavirus crisis has revealed its underlying failure to develop its society. Vast class inequalities, poor wages for a massive chunk of the population, tying health care to employment at a time of tremendous unemployment, and severe racial inequities have all contributed to the scale of the catastrophe. Plutocracy, in which the billionaires decide on policy, is guaranteed to put profit before people, in ways that ultimately will hurt profits. Trump prioritized keeping the economy open, wiping out the progress made with the initial lockdown, and we lack a national response on testing and contact tracing.

The Trump team is said now to be preparing messaging that Americans will just have to live with the pandemic. Perhaps they are hoping for herd immunity, which will kick in when 60 percent of the population has had the virus. But a recent large scale study in Spain showed that achieving herd immunity may be impossible and in any case would take years. Moreover, that would be 198 million people, and even Trump admits nearly two million Americans would die of the disease if it ran wild to that extent. Only 1.2 million Americans have died in all our wars since 1776.

Trump has not only played down the dangers of Covid-19 in an unconscionable manner, he has championed dirty coal plants that are responsible for a big chunk of America’s annual carbon dioxide emissions. In my state of Michigan, coal still generates about a third of our electricity, polluting lungs and contributing to global warming.

So here’s the other comparison in the light of which the US does not look good.

Britain only has two coal power plants left, and this year it went 67 days without burning any coal at all. For a country that did everything with coal since the eighteenth century, this is a huge milestone. The remaining plants will be closed by 2024. For the first time, renewables accounted for nearly half of UK electricity generation in the first quarter of this year. About a third of Britain’s electricity now comes from wind alone

Spain is closing seven of its 15 remaining coal plants this year, and another four next year.

Even Germany, the biggest coal user in the European Union (it accounts for 28 percent of electricity generation there, almost as much as backward Michigan), has committed to phasing out coal by 2038. German greens want it to be way before then, and the continual drop in price of wind and solar makes it likely German coal won’t go the distance.

I see a parallel here. Coal is a public health crisis, from which thousands of people die every year (lung and heart disease, mercury poisoning, etc.). But it is also the dirtiest fossil fuel and is responsible for a good deal of global heating, which is in turn another public health crisis.

Our president wants to subsidize coal and keep it alive, just as he wants restaurants and bars open at this time of rising infections, which has the effect of keeping covid-19 alive.

Trump may not be technically insane but anyone can see that there is something wrong with him. That he has these damaging and wacky ideas is not surprising. What is surprising is how much of America’s elite is willing to go along with him. In contrast, in Europe the policies of the European parliament have put great pressure on member states to phase out coal and go low-carbon. Spain is responding to that pressure from Brussels. The US congress could also follow Brussels’ lead if it wanted to. But 67% of senators would be needed to overrule Trump, and there just aren’t that many GOP senators with common sense and backbone.

Lebanon’s Leaders Resign over deaths of 200, but Trump refuses Accountability for 163,462 Deaths

Trump Wants to Defund the Universities to Stop People Thinking

Donald Trump, James Madison and the Defense of the White House

Why does Far Right get a pass by American law enforcement?