By Democratic Socialists of America 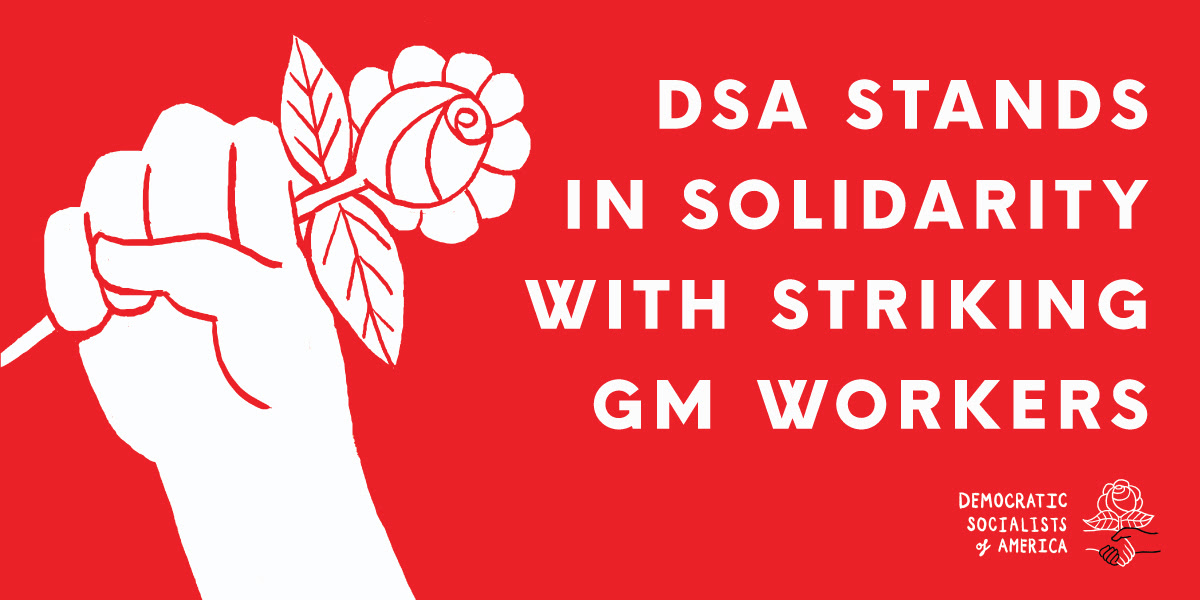 Our union brothers and sisters at GM are the poster children of the slogan “They got bailed out, we got sold out.” While GM has enjoyed record profits, $11.8 billion last year,  the company continues to squeeze concessions from workers. As socialists we know that the employer’s profits come from our labor.

That is why we are heartened to see UAW workers declaring that they are ready to fight back. We stand in solidarity with them until they are victorious. We stand with them in their fight to beat back healthcare takeaways, end the two-tier wage system, and secure real wage increases.

This strike connects deeply to two of DSA’s major campaigns: Medicare For All and building a democratic, militant union movement. One of the major proposed takeaways is around healthcare. Medicare For All is vital not only because healthcare is a human right but because Medicare for All would eliminate one of the major burdens in contract negotiations. GM is wielding health insurance as a cudgel to scare workers to accept concessions and the two-tier status quo. Winning M4A will strip such power from the capitalist class.

The reports about the preparation for the strike are a textbook example of why we need democratic unions. In the lead-up to the strike members were not included in decisions; there were no informational pickets, no open bargaining, and no community outreach. We hope that this strike will help workers build a vibrant reform movement in the UAW and rebuild a union that is able to fight against the corporations.

Any problems with the UAW officialdom do not diminish the importance of this strike, though. Members are standing strong. DSA will stand in solidarity with the workers until they win!Here is how you can help:

Now is the Time for Solidarity

A Summary of Democratic Socialists of America’s Strategy Document