A debate rages in the media world about the trend of writers with substantial online followings moving away from writing for traditional publications and simply going to the website Substack, where writers sell content directly to their readers, untethered from any editorial constraint. (It’s like a less titillating version of OnlyFans.) Substack has a number of investors, including the Silicon Valley venture capital firm Andreessen Horowitz.

Matt Taibbi, best-known to Americans for his writing for Rolling Stone, responded on Substack (3/1/21) to criticism of Substack from UCLA professor Sarah Roberts (Twitter, 2/28/21). Here’s the short version of the back-and-forth: Roberts believes journalism requires the vast world of factcheckers, editors and institutional discipline for good reporters to produce good journalism. Taibbi’s response—which many FAIR.org readers may agree with—is that Substack is needed because “traditional news outlets have become tools of the very corporate and political interests they’re supposed to be overseeing,” meaning the establishment press has ceased to be a check on power, but instead is a public relations tool of government and business.

For younger audiences, Taibbi’s argument might sound revolutionary. But this was also the mantra of bloggers in the 2000s who, with the growing ubiquity of internet connections, saw blogging as a way to get the narrow editorial standards often used to keep the gates closed to ideas and journalism that challenge the status quo. There was a growing need for new outlets in the United States at the time, because many newspapers, with the notable exception of Knight Ridder (later acquired by McClatchy), had joined in the Bush administration’s full-court press for the Iraq War (FAIR.org, 3/19/07; National Interest, 6/15/18). Blogging had a sort of anarchic allure that the staid publishing world lacked, but the culture didn’t last, in part because it’s hard to monetize, but also because much of that energy moved to emerging social media networks (Guardian, 7/16/14). 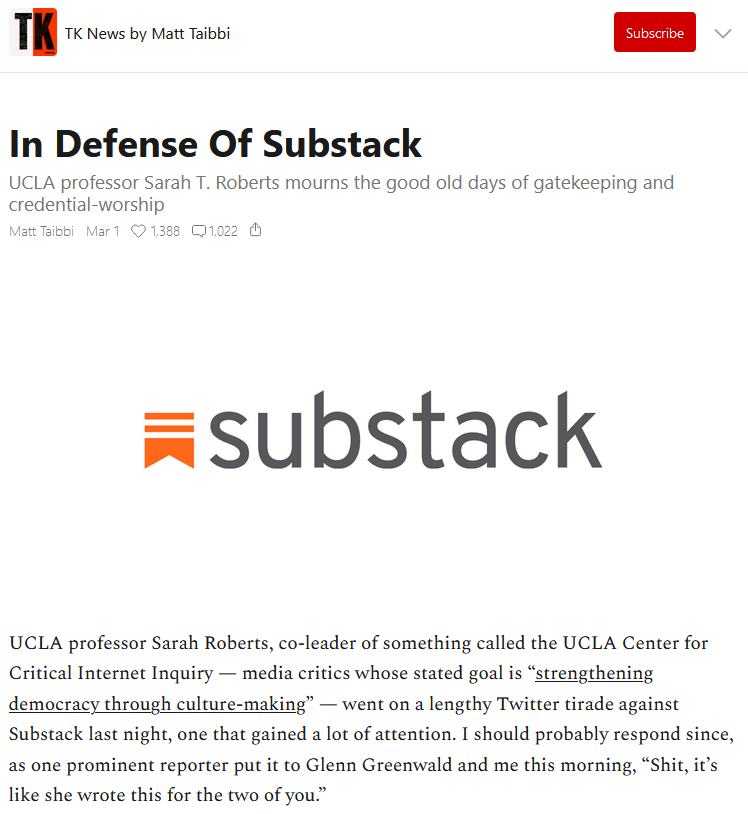 Likewise, legal and extra-legal alternative broadcasters defied corporate and government consolidation of radio in the 1970s, as profiled in Jesse Walker’s  book Rebels on the Air.  Before that, the 1960s saw an explosion in the New Left press. Substack is hardly a new form of media rebellion, but rather it has made it easier for writers to independently make money from their work.

This might work out for some writers, but individuals on Substack can hardly recreate the institutional power needed to create a fully functioning newsroom; will Substack audiences also start paying the salaries of needed behind-the-scenes staff, like researchers, producers and translators? The medium is a great way for pundits who can’t find a home for their columns to get their words out there, but today’s journalism isn’t short on hot takes; its problem is a dearth of full-time foreign correspondents and long-term investigative units.

A few examples: The problem with McClatchy—which won a Polk Award for its excellent coverage of the Syrian conflict (McClatchy, 2/17/13) —  isn’t that it doesn’t have enough pundits to challenge Washington foreign policy, the problem is that it closed its foreign bureaus (Poynter, 10/12/15). The Indianapolis Star and the Boston Globe were only able to uncover wide-spread national sex abuse scandals because the papers could provide staff and monetary resources to in-depth investigations (stories that are told in the movies Athlete A and Spotlight).

While the number of traditional state government reporters declined last decade (NPR, 7/10/14), there has been an uptick in start-up, online publications devoted to the beat to cover that hole (Governing, 3/1/15). Layoffs at the New York Daily News (FAIR.org, 7/26/18) and the closure of the Village Voice have impoverished  New York City’s once robust news environment. Newer entities like The City, and Gothamist’s merger with NPR affiliate WNYC, have helped far more than those individual writers going to Substack.

In fact, Taibbi, perhaps accidentally, acknowledged this when he asked, “Why did a source like former NSA contractor Edward Snowden choose to come forward to Glenn Greenwald in particular?” He added that Snowden “wasn’t bothered by the fact that Glenn didn’t come up through the ranks of a paper like the New York Times or Washington Post.”

Greenwald, at the time of the Snowden scoop, however, wasn’t a lone gunman, but a columnist for the Guardian, and had that paper’s resources, including the support of other journalists (like now-retired correspondent Ewan MacAskill), to advance such a big investigation. Incidentally, the New Yorker (9/3/18) noted that “Snowden began to talk with Laura Poitras, and then with the [Washington Post] journalist Barton Gellman,” and then “Greenwald and Snowden finally started an encrypted conversation.” Additionally, the Guardian (8/23/13) shared access to some of the leaked documents with the New York Times to protect the information from the British government.

Greenwald went on to co-found the Intercept, published by First Look, which, rightfully, committed resources to hiring full-time journalists and researchers to do what Taibbi says he wants: more aggressive and adversarial investigations of powerful institutions. New York (2/24/21) explained how such a project requires the work of a massive institution:

Keeping a trove as sensitive as the Snowden archive required substantial security measures: First Look even spent hundreds of thousands of dollars to build a dedicated secure room, similar to what federal officials use to review classified information.

And the exception there proves the rule, too. The biggest shame of the Intercept is that it allowed the identity of a government source, Reality Winner, to become exposed, and she is now in jail. This terrible case isn’t a folly of too many factcheckers and onerous editorial oversight, but a failure of not enough institutional rigor to safeguard an investigation (New York Times, 9/13/20).

Substack is, and will likely continue to be, an interesting place for essays and commentary that don’t make it to the major op-ed pages, such as Heather Cox Richardson (New York Times, 12/27/20). It has also been a boon for the lost art of the niche newsletter—a hyper-focused publication, such as Nathan Tankus’ Notes on the Crises, focusing on monetary policy (Bloomberg, 7/2/20), or LJ Dawson’s The Des, which covers criminal justice. New York politics journalist Ross Barkan uses Substack, but he saves his best reported stuff for places like Jacobin, or his upcoming book on New York Gov. Andrew Cuomo.

But Roberts’ fear—and Taibbi’s celebration—of Substack are misplaced. Corporate media certainly need disruption. But it has to happen at scale, not with a few writers here and there on an open microphone.

In Defense of the Campus