en. Bernie Sanders on Friday added his voice to a growing chorus of concern and condemnation after President Joe Biden ordered an attack Thursday on Iran-backed militants in eastern Syria without seeking congressional approval.

In a statement, Sanders (I-Vt.) said he was “very concerned” that the U.S. attack—which according to the Syrian Observatory for Human Rights killed 22 Iraqi Hezbollah and Iraqi Popular Mobilization Forces fighters—”puts our country on the path of continuing the Forever War instead of ending it.”

“This is the same path we’ve been on for almost two decades,” said Sanders. “For far too long administrations of both parties have interpreted their authorities in an extremely expansive way to continue military interventions across the Middle East region and elsewhere. This must end.”

Sanders noted that “in 2019 Congress passed the first War Powers Resolution in history to end U.S. participation in the war in Yemen,” and that lawmakers passed another resolution last year to prevent former President Donald Trump “from starting a war with Iran.”

“These were important and historic steps by Congress to reassert constitutional authority over the use of force, and we must continue to built on these efforts,” Sanders said. “Our Constitution is clear that it is Congress, not the president, who has the authority to declare war.” 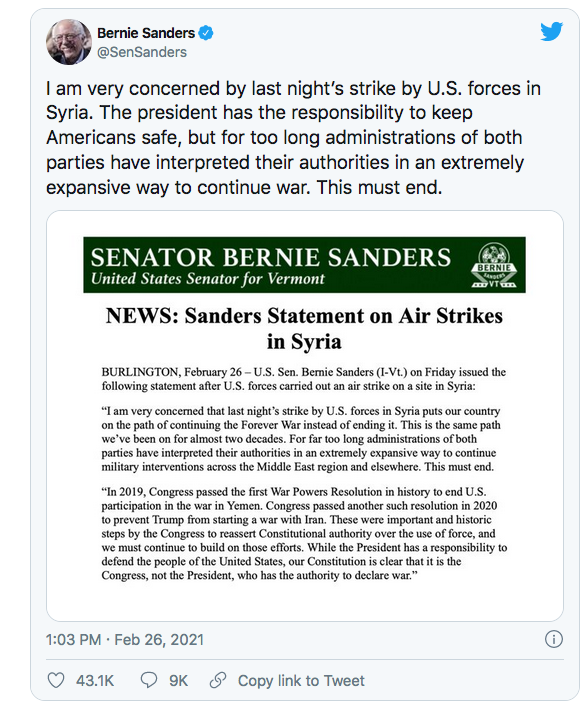 Earlier, other lawmakers said Biden should have sought congressional authorization for the strikes, which some legal experts say violated international law. While calling attacks by Iran-backed militants on Iraqi bases hosting U.S. troops “unacceptable,” Sen. Chris Murphy (D-Conn.) stressed that “retaliatory strikes, not necessary to prevent an imminent threat, must fall within the definition of an existing congressional authorization of military force.”

Rep. Ro Khanna (D-Calif.) tweeted Friday that Democrats “ran on ending wars, not on escalating conflicts in the Middle East.” It was the Democratic administration of then-President Barack Obama that first intervened in the Syrian civil war in 2014.

While U.S. airstrikes have decreased dramatically since Biden took office, Thursday’s attack—which followed a joint U.S.-Iraqi assassination of an Islamic State leader on January 27—was the second reported bombing of his tenure.

On Thursday, Common Dreams reported on a new study and interactive map from the Brown University Costs of War Project and USA Today detailing the U.S. military’s so-called “counterterrorism” operations in 85 nations, part of the open-ended post-9/11 “War on Terror” that has seen over half a dozen countries attacked or invaded, hundreds of overseas American military bases built, hundreds of thousands of lives lost, and trillions of dollars spent—with no end in sight.

Our work is licensed under a Creative Commons Attribution-Share Alike 3.0 License. Feel free to republish and share widely.

Spain to Experiment With 4-Day Workweek