The FBI Spends a Lot of Time Spying on Black Americans

The FBI has come under intense criticism after a 2017 leak exposed that its counterterrorism division had invented a new, unfounded domestic terrorism category it called “black identity extremism.” Since then, legislators have pressured the bureau’s leadership to be more transparent about its investigation of black activists, and a number of civil rights groups have filed public records requests to try to better understand who exactly the FBI is investigating under that designation. Although the bureau has released hundreds of pages of documents, it continues to shield the vast majority of these records from public scrutiny.

The sheer volume of documents those surveillance efforts have produced is troublesome, advocates say. The latest batch of FBI documents — obtained by the American Civil Liberties Union and the racial justice group MediaJustice and shared with The Intercept — reveals that between 2015 and 2018, the FBI dedicated considerable time and resources to opening a series of “assessments” into the activities of individuals and groups it mostly labeled “black separatist extremists.” This designation was eventually folded into the category of “black identity extremism.” Earlier this year, following an onslaught of criticism from elected officials, civil liberties advocates, and even some law enforcement groups, the FBI claimed that it had abandoned the “black identity extremism” label, substituting it for a “racially motivated violent extremism. ” Critics say that this designation conveniently obscures the fact that black supremacist violence, unlike white supremacist violence, does not actually exist.

Although the FBI has frequently changed its labels and terminology, the surveillance of black Americans has continued

Although the FBI has frequently changed its labels and terminology, the surveillance of black Americans has continued. As The Intercept has reported, following the killing of Michael Brown by a police officer in Ferguson, Missouri, the FBI began spying on Ferguson activists and tracking their movements across states, warning local law enforcement partners that Islamic State group supporters were “urging” protesters to join their ranks. The FBI also drafted a mysterious “race paper,” the contents of which remain secret even though the bureau has disowned it. And as the Young Turks reported, the bureau has established a program dubbed “Iron Fist” targeting so-called black identity extremists with undercover agents.

The latest documents were turned over to the ACLU and MediaJustice after the groups sued the FBI last March over its failure to comply with a public records request. While the bureau is expected to release more documents in the coming months, what it has turned over so far is so heavily redacted that it is largely incomprehensible. In addition to removing entire paragraphs and all geographical and other identifiers from the documents, the FBI simply withheld hundreds of pages in full.

“These documents suggest that since at least 2016, the FBI was engaged in a national intelligence collection effort to manufacture a so-called ‘Black Identity Extremist’ threat,” Nusrat Choudhury, deputy director of the ACLU Racial Justice Program, told The Intercept. “They are spending a lot of energy on this and they are clearly reaching out to other law enforcement.”

“We are troubled about the fact that so much information is not being made available to the public,” she added. “We just know that the government is likely redacting information that should be disclosed to the public — it frequently does.”

A bureau spokesperson wrote to The Intercept in a statement that “every activity that the FBI conducts must uphold the Constitution and be carried out in accordance with federal laws.”

“Investigative activity may not be based solely on the exercise of rights guaranteed by the First Amendment,” the spokesperson added. “The FBI’s investigative methods are subject to multiple layers of oversight, and we ensure that our personnel are trained on privacy, civil rights, and civil liberties.”

Most of the newly released documents are investigative files that show the FBI has opened a number of what bureau guidelines refer to as “assessments,” primarily into the activities of individuals it calls “black separatist extremists.” Assessments differ from full-blown investigations — or “predicated investigations,” in the bureau’s lingo — because they do not need to be predicated on a factual basis. That means the bureau needs no evidence of criminality or a national security threat in order to open an assessment. Assessments need only to be authorized for a specific purpose, such as recruiting new informants.

As a new report by the civil liberties group Defending Rights & Dissent notes, when choosing targets for an assessment, agents are allowed to use ethnicity, religion, or speech protected by the First Amendment as a factor, “as long as it is not the only one.” As the report notes, “Even though the standards for opening an assessment are extraordinarily low, the FBI is allowed to use extremely intrusive investigative techniques in performing them, including physical surveillance, use of informants, and pretextual interviews.”

During pretextual interviews, FBI agents are not required to disclose their status as federal officials and can lie about the purpose of the interview in order to elicit incriminating statements. Agents can open an assessment without a supervisor’s approval for a period of 30 days, after which a supervisor must sign off on an extension. After 90 days, an assessment must be reauthorized. Assessments can be reauthorized an unlimited number of times, which means that the FBI can surveil law-abiding citizens posing no national security threat for years. 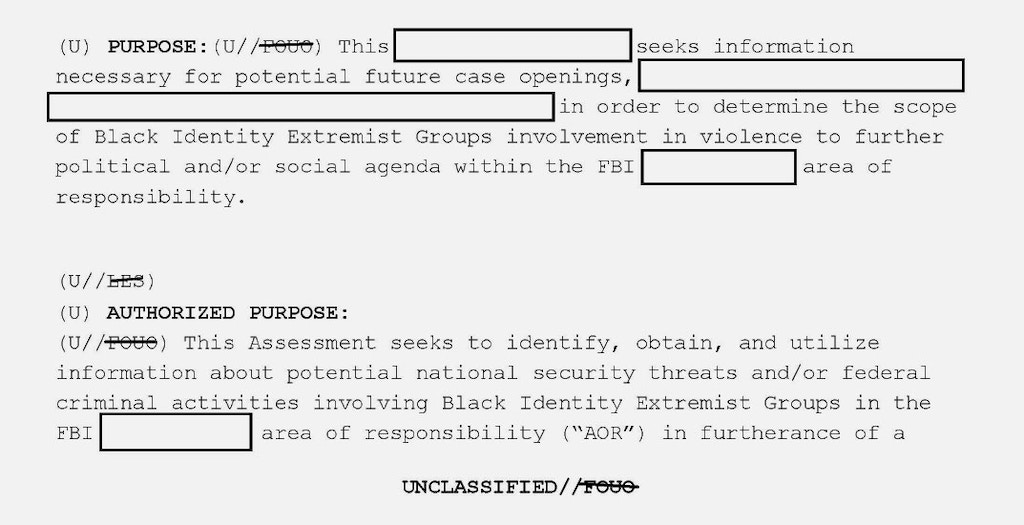 Heavily redacted FBI documents show the bureau opened a series of assessments to investigate black groups and individuals despite no evidence that they were committing crimes or posing a security threat.

Document: FBI via ACLU and MediaJustice

Many of the new documents obtained by the ACLU and MediaJustice suggest that the FBI repeatedly reauthorized assessments beyond their initial duration periods. Because of the heavy redactions, however, it is not clear whether the bureau has opened many different assessments or whether the same handful of assessments have been extended multiple times. While some of the assessments refer to a particular geographic “area of responsibility,” others do not include such a designation, suggesting that they may refer to nationwide assessments of certain groups or organizations.

The reauthorization requests released by the FBI include a series of questions about the objective of the assessment, whether it was fulfilled, and any investigative techniques deployed. Because the answers are fully redacted, however, it’s impossible to tell whether the assessments had plausible justifications. It’s also unclear whether any robust review led to each reauthorization or whether supervisors merely rubber-stamped extension requests, Choudhury said. “Unfortunately they’re just redacting the parts of these that would give us an objective check on how they’re making decisions.”

In addition to paperwork relating to its multiple assessments, the new documents include reports of “liaisons” with organizations outside of the FBI and electronic communications suggesting active FBI collaboration with other law enforcement agencies. The bureau’s memos refer to a number of “strategy meetings” involving local law enforcement, including in the days before the first anniversary of Brown’s killing in Ferguson, which reignited protests. In another exchange, law enforcement partners were asked to contribute to “collecting better intelligence on possible Black Separatist Extremists.”

The documents also refer to the FBI’s work with “Joint Terrorism Task Forces,” which bring together agents with officers from hundreds of state, local, and federal law enforcement agencies. Because JTTFs are run by the FBI, they operate under FBI guidelines, which provide fewer protections for speech, privacy, and civil liberties than the rules governing local police and other law enforcement.

But while federal and other law enforcement cooperation is routine, involving local police in vague and sweeping political surveillance efforts is deeply problematic, critics say. In fact, threat assessment reports such as the one on “black identity extremism” pose a particular challenge to local law enforcement, said Mike German, a former FBI agent and vocal critic of the bureau.

“What is it telling law enforcement officers to do?” German told The Intercept. “Most of [these assessments] just say, ‘Be very afraid of this new threat,’ and they don’t give any practical advice for how to identify that threat, or how to distinguish that threat from legitimate protest, or nonviolent civil disobedience, or other First Amendment-protected activity that might promote some similar ideas, but isn’t violence. So then the solution for these police departments that receive it is to treat all of them as if they are potential threats.”

To activists already concerned with police violence and a lack of accountability, police collaboration with the FBI’s surveillance efforts is particularly troubling.

To activists already concerned with police violence and a lack of accountability, police collaboration with the FBI’s surveillance efforts is particularly troubling.

“This is happening at the same time when jurisdictions across the country, our police departments, are actively acquiring surveillance tools in really secretive ways, without any sort of oversight and regulation,” said Myaisha Hayes, an organizer with MediaJustice, in an interview. “And it makes me worry that those tools can be used against activists given the sort of environment that the FBI is creating around criminalizing dissent.”

Throughout the documents, the FBI repeats boilerplate warnings that some “indicators” of domestic terrorism “may constitute the exercise of rights guaranteed by the First Amendment” and reminds agents that “the FBI is prohibited from engaging in investigative activity for the sole purpose of monitoring the exercise of First Amendment rights.”

Even so, the documents suggest that the bureau did in fact target protected speech as part of its surveillance activities, at some point monitoring the October 2015 “Million Man March” in Washington, D.C. While most of the memo concerning the march is redacted, the document does refer to the “violent rhetoric and nature” of the event — even though the march was in fact a nonviolent demonstration that drew tens of thousands to the capital to commemorate the original 1995 event and protest a series of high-profile police killings of black men.

While the FBI has a long history of targeting black Americans — most notably when it infiltrated and sought to disrupt the civil rights movement as part of its COINTELRPO political policing campaign — the bureau has in recent years shifted its target from those espousing “separatist” views to the much larger group of those protesting police violence. As The Intercept has reported, in an internal email exchange obtained by the government transparency group Property of the People, Michael F. Paul, an official with the FBI’s Counterterrorism Division, wrote to colleagues that the bureau had updated its definition of “black separatist extremism” in order “to broaden it beyond simply those seeking ‘separatism.’” Paul added: “The threat or movement has simply evolved, and many are seeking more than/other than separation.”

What those in the targeted “movement” say they are seeking is simply an end to police violence, as well as greater justice and government accountability

In fact, what those in the targeted “movement” say they are seeking is simply an end to police violence, as well as greater justice and government accountability.

“The Black Lives Matter movement, black-led organizations that are focused around policing and police brutality have not had a single incident of violence associated with their activist work,” Hayes told The Intercept. “That tells me that what the FBI is looking for is opportunities to basically disrupt organizing that challenges and threatens the status quo.”

Bill de Blasio Promised to Change the NYPD. His Courage Failed Him

ICE Cracks Down on Its Critics