Last week, the Climate Change Committee (‘CCC’), the Government’s own climate advisers, released another staggering report on the Government’s utter inaction. It warned the Government to start preparing for a 4˚C warmer world, a future implying the loss of billions of lives, with marginalised communities and those in the Global South impacted most.

How many more alarm bells do we need? We cannot carry on like this.

While no one could’ve predicted 2020 would turn out this way. It is no coincidence we face multiple crises all at once. Climate breakdown, Covid-19, racial injustice, economic inequality – all are symptoms of a toxic economic system that is driving us to extinction.

The Government is failing to do what’s necessary to keep us safe. They ignored the warnings about coronavirus, now they’re ignoring warnings of a 4˚C warmer world, with any hopes of a green recovery rapidly slipping away.

We cannot carry on like this. This system is killing us. We want to live.

And that’s why we need to bring the Rebellion back to our streets. From 1 September, we will peacefully blockade the UK Parliament in London until they act on the climate emergency, passing our 3 demands into law.

Get ready to rebel, find everything you need to know here, sign up here and join the Rebellion Broadcast for the latest info.

We are already taking action! Rebels have declared their MP’s offices as crime scenes after the alarming CCC report, protested the Bank of England’s bailouts for polluters, and 5 rebels squatted on the roof of Bristol’s City Hall for 9 days to highlight illegal air pollution levels.

Over the past weeks, groups in XR have spent time learning and reflecting on our practices. Our statement on XR’s relationship with the police recognises how our tactic of arrest made it easier for people of privilege to take part and fed into an unjust system.

Please feed into this consultation on questions of social and climate justice, anti-racism and decolonisation, and how our demands reflect these.

And this week we celebrate another win! Following our actions at Bradley opencast coal mine back in February and pressure from fellow campaign groups, Durham County Council have rejected proposals to expand the mine as the environmental impacts would be disastrous.

This shows just what we can achieve when we act together! We urge you to join your local group now and start mobilising for the next Rebellion!

Beginning on 1 September, the Rebellion will return.

On that day the UK parliament starts re-sitting after the summer: but we’re not going to let them back in until they agree to start anew with justice, care and life at the heart of it.

From the 1st we will peacefully blockade the UK Parliament in London until they promise that the first thing they’ll do is pass our 3 demands into law. We’ll keep the blockade going for as long as it takes, so take two weeks off work starting from the 1st.

The Rebellion will not just be focused on London though. Welsh rebels will join us in rebellion by causing disruption in Cardiff, with rebels in the North and Scotland formulating plans as we speak. More on this coming soon.

In order to build pressure towards the blockade, there will be a Countdown to Rebellion starting 28th August with local groups around the country invited to cause high impact disruption in their own regions, to gather and galvanize rebels in readiness for action and to warn the Government that the Rebellion is coming!

If we stand a chance of making this historic Rebellion successful we need to grow the movement bigger than before. This Rebellion belongs to all of us so if you haven’t already, join a local group and start using our mobilisation methods to help grow the movement.

Find out more about the plans for both of these on the website here and the Rebellion Weavers analysis for more.

Together we are powerful. Crisis does not have to mean collapse.

The UK Government is not even close to meeting its own climate targets. That is the depressing conclusion of the Government’s own climate advisers, the Committee on Climate Change.

Their new report reveals a shocking lack of progress made by the Government to reach its lacklustre target of net zero emissions by 2050, exacerbated by a lack of political leadership.

The Paris Climate Agreement limit of a 1.5°C rise in global temperature is barely referenced in the report. Instead, Government departments are advised to plan for “a minimum of 2°C… with consideration of 4°C”. In 2008 the Committee said a 4°C rise was the threshold of extreme danger. Climate experts believe it could lead to the death of billions.

You can hear an XR Scientist discuss the new report in more detail here.

Rebels from across the country marked the publication of the terrifying report by marching to local MPs offices and government departments to deliver letters demanding an end to their criminal inaction.

A world-leading climate scientist backed XR’s message that the 2050 target is too late, explaining how both the Committee members and Government policymakers are part of a cosy consensus that ignores the need for radical system change.

5 hardy rebels scaled the imposing entrance to Bristol City Hall to demand that the Mayor and Council commit to legally clean air in every suburb of the city by April 2021. Despite heavy heat, rain, and wind, they lasted a mighty 9 days living up on the roof.

Lockdown is the first time the city has had clean air in over two decades.

A local rebel said: “Bristol City Council was one of the first councils to declare a climate emergency in the UK but so far we have heard no concrete plans … now we want actions from the Council, not words.”

Last week one of the rooftop rebels abseiled down to place a gas mask over the statue of an Elizabethan merchant venturer. A few days later a video of citizens speaking out about air pollution and offering messages of support was projected onto the front of the building.

Rebels protested outside the Bank of England after it authorised bailouts for high carbon industries such as airlines and pharmaceutical companies.

The Governor of the Bank of England stated recently that ‘Unless we act now, the climate crisis will be tomorrow’s central scenario and, unlike Covid-19, no one will be able to self-isolate from it.

We have a choice: rebuild the old economy, locking in temperature increases of 4°C with extreme climate disruption; or build back better, preserving our planet for generations to come.’

The inconsistency between words and actions could not be clearer.

The financial sector holds the keys to a greener future. The Bank of England must support a green recovery.

Tell the Bank of England to stop funding climate breakdown. Bailout people and the planet, not the fossil fuel economy.

The Bank of England is using Covid-19 loans to criminally keep the carbon economy alive instead of funding the sustainable regrowth we desperately need. It’s given £1.8 billion in loans to airlines, £1.1 billion to the car industry, and £1.6 billion to pesticide companies.

Call or email the Bank of England during their office hours 9am-5pm Mon-Fri, take action here.

In recent weeks there has been renewed reflection, discussion and action in our movement relating to questions of social and climate justice, anti-racism and decolonisation (to mention just a few) and how our demands reflect these.

It’s important that our response is inclusive and empowering and brings together the passion, clarity and depth of conviction behind the efforts so far.

With this in mind, the XRUK Rebel Hive has created a movement-wide listening & learning process called Justice Within XRUK. This process will be based on People’s Assemblies with inputs and questions for the assemblies set by a group representing a diversity of marginalised voices.

We encourage all rebels to get involved in this important process, as we grow our movement from within.

Can you dedicate some of your time to help build our movement and prepare for the next Rebellion? Join Us! Sign up here. We are looking for dedicated, remote rebels.

Want to help tell the story of the Rebellion? Join our Newsletter team!

We are looking for organised rebels who can help coordinate the team and tech-smart rebels with CRM, email sendout and HTML experience. Action Network know-how a huge plus, but not required. You will be supported by a lovely group of rebels.

Send us an email at xr-uknewsletter@protonmail.com 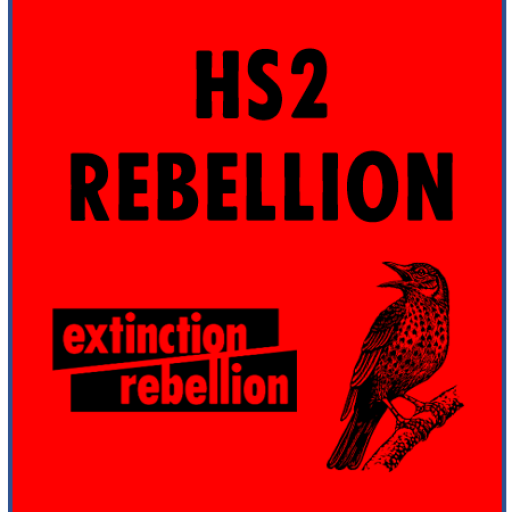 The Midlands XRHS2 Working Group is calling for urgent help to stop HS2. The construction of HS2 is destroying ancient woodland and precious habitats at a time when they are more essential than ever.

Help us end this destruction, write to your MP today.

Join XR Working Class for a talk on 15 July 7.30-9pm, about the system change we need, with an intro from Mike Jackson (previously secretary of ‘Lesbians and Gays Support the Miners’, featured in the film Pride). Covid-19 and the economic crash are just a warning of the enormous suffering and destruction that’s coming if we don’t act on the climate and ecological emergency.

How to Self-Organise: Learning Series

Rebels across the globe have created a Self-Organising Learning Series to help improve productivity, empowerment and team decision-making.

Sign up for a range of interactive sessions using the new link here. You can also see the full course syllabus here and access learning materials here. 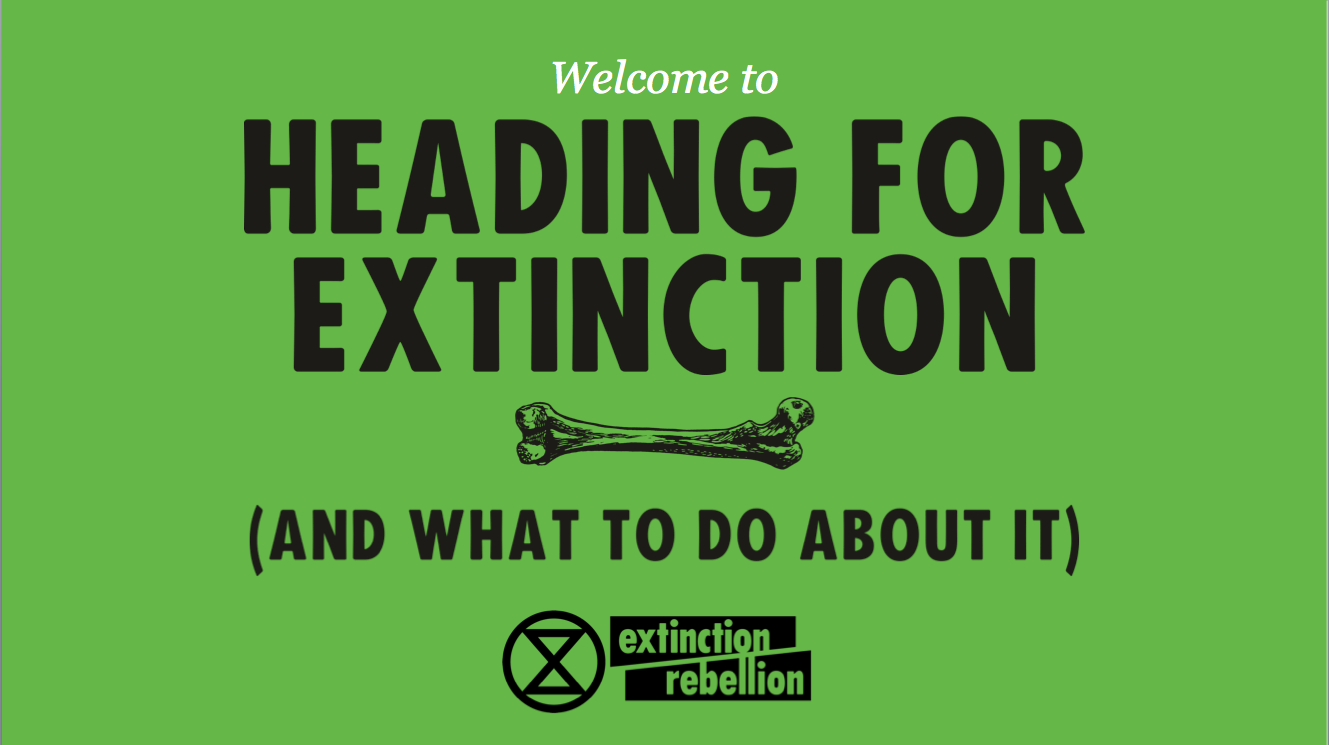 We’ve launched a new version of our introductory talk ‘Heading for Extinction and what to do about it’, with the latest science and updated information on XR as a movement. Contact your regional training team or request a talk here to start mobilising for our next Rebellion.

Everything you need to get started is in this pack. Join us on Saturday mornings at 11am for our weekly Rebel Ringing party. Make yourself a cuppa and together we’ll ring for the planet!

XR Youth UK National Support Team are taking a break until 27 July. We hold regenerative cultures as an important part of the way we work so deem this break to be essential for the well-being of our rebels.

10 years ago, scientists identified 16 potential tipping points in the earth system that could spell disaster. Today, there is evidence that 9 of these are already active.

The fourth episode of Ask a Scientist LIVE is about tipping points: What should we worry about? Do tipping points affect the environmental movement? Does it mean it’s too late to act?

Thank you so much for reading! Even in lock-down, there’s so much exciting stuff going on in the movement that we barely have time to write this sign-off. Keep up the good work! If you have any questions or queries, please get in touch at xr-uknewsletter@protonmail.com.

We will not be intimidated

Stories From The Rebellion

Pop the kettle on, ‘Authoritarian Regime’ is starting

Boats, Bills and and Boris the Bank Engine

The Rebellion is coming