Bloomberg gets Desperate with the Venezuela Default Hype

An honest headline to this recent Bloomberg article would have been “Traders and Analysts Back Away from Venezuela Default Claims”.

Regardless, the global downturn of 2008 / 2009 should have taught everyone not to give a damn what “traders and analysts” say, or even what most professional economists say.  The nonsense about Venezuela being on the brink of default adds a few exclamation points to that important lesson.

Back in September, 2014 – with oil prices over $90 per barrel – Bloomberg and the New York Times (NYT) editorial board among countless others – were hyping claims of an imminent default on Venezuelan government bonds. It all stemmed from an article by Ricardo Hausmann and Miguel Angel Santos in early September that said “Venezuela’s government needs to pay $5.2 billion in the first days of October [2014]. Will it?” A few weeks later, the NYT editors said “leading economists” had warned that Venezuela’s government “could default on its foreign debt this fall”.

Fall of 2014 passed and there was no default. Oil prices also plummeted, falling briefly below $50 in January: still no default. As I’ve said before, if Venezuela, a country extremely dependent on oil exports, was on the edge of a financial cliff with prices at over $90 a barrel, how could they not have been pushed off long before prices fell to under $50? 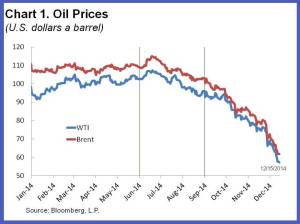 Chart above is taken from here

Bloomberg now reports “with oil prices ticking up and new financing commitments, cash-strapped Venezuela is persuading traders and analysts alike to back away from calls the country will default this year“. Only two of the ten banks Bloomberg surveyed refused to back away from the default claims. Bloomberg therefore decided to go with the headline “Venezuela Still Seen Defaulting in 2015 to Deutsche Bank”. Sure – that’s not desperate.

It’s true that oil prices have been “ticking up”  since January, but they are still 40% below where they were in early September when “leading economists” provoked a stampede of “looming default” speculation. Mark Weisbrot, in a piece Fortune magazine published, offered an extremely rare dissenting view. He simply looked at the numbers which clearly explained why, even at December’s extremely depressed oil prices, Venezuela was not in danger of being forced to default. Unfortunately, being credible in the eyes of the corporate press has nothing to do with your track record. If it did, then outfits like Standard & Poor and Moody’s would never be cited by anyone, expect with derision. At the very least, the corporate media would also revise its criteria for “leading economists” to exclude Hausmann and Santos.