The most beautiful and most terrifying Twitter experience of my life — one that made me laugh so hard I got hiccups, while also convincing me that humans are destined to obliterate themselves — began with several small jokes like this a few days before the 2016 election:

It ended this past week with an unhealthy 84-tweet long thread by me and a quote tweet by Gen. Michael Flynn’s brother Joseph, informing his 400,000 Twitter followers of my malfeasance: Everything in between happened because the right wing has a problem: They know that the 2020 election was stolen but, despite their mighty efforts, have failed to uncover any evidence for this. Granted, this isn’t a huge problem for them, since they care about evidence about as much as the Dalai Lama cares about getting on Bumble.

Still, they’ve been experiencing some modest cognitive dissonance that they’d prefer to resolve. The ideal solution would be a member of the hated mainstream media openly confessing that he and his colleagues don’t just put their thumb on the scales during their day jobs but are also so committed to cheating that they moonlight to do it directly. My 2016 tweets were that solution.

Natalie Winters, whose Twitter bio says she’s a student at the University of Chicago, had already written an article last year illustrated with my enormous head looming over a vulnerable mail-in ballot. Then, last Thursday, she started tweeting again about my criminality. I loved the idea that my compatriots and I had been openly bragging about our destruction of Trump ballots in a public forum, yet only she, with her dogged investigative prowess, had been able to run us to ground.

Then I got another tweet, demanding that I be arrested. I decided to say something so preposterous that no one could miss that I’d been joking all along:

This didn’t work. Instead, it seemed to just draw more and more outraged responses. So I started claiming that the right to destroy Trump ballots had been written into the Constitution by the Founding Fathers and that people didn’t realize this because we’ve stopped teaching civics in public schools. When someone tagged the @FBI account in hopes that it would investigate, I explained that the whole project to destroy Trump ballots had been the agency’s idea in the first place.

This also did not work, so I went beyond man’s law to God’s. The Ten Commandments demand that you shred Trump ballots, I said. When someone warned that I would be punished by karma in the end, I explained that they’d misunderstood what karma is. Even this did not stop the deluge; on the contrary, when Flynn directed his audience to my anti-American proclamations, it exploded in intensity. I also found that I couldn’t stop myself. When someone tagged in government agencies, I did the same for all kinds of different authorities. 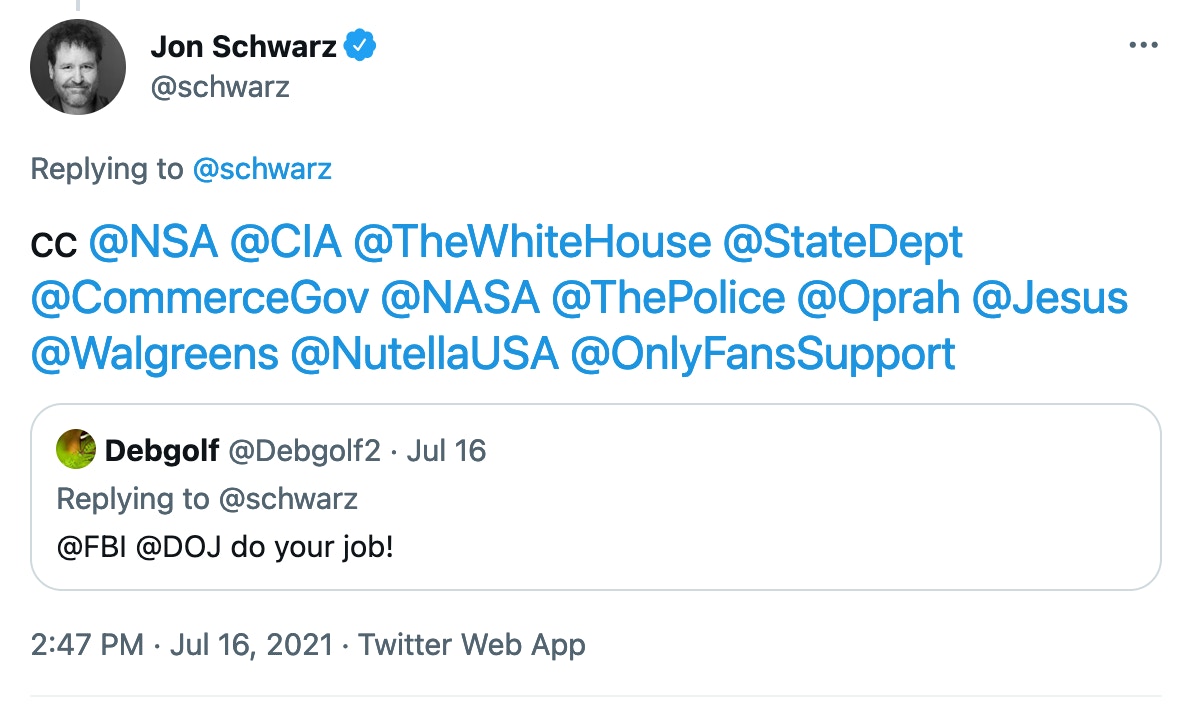 When I received voluminous physical threats, I responded with blithe, friendly incomprehension: Sometimes I revealed that tweets that seemed to be from right-wing patriots were actually from members of the conspiracy. 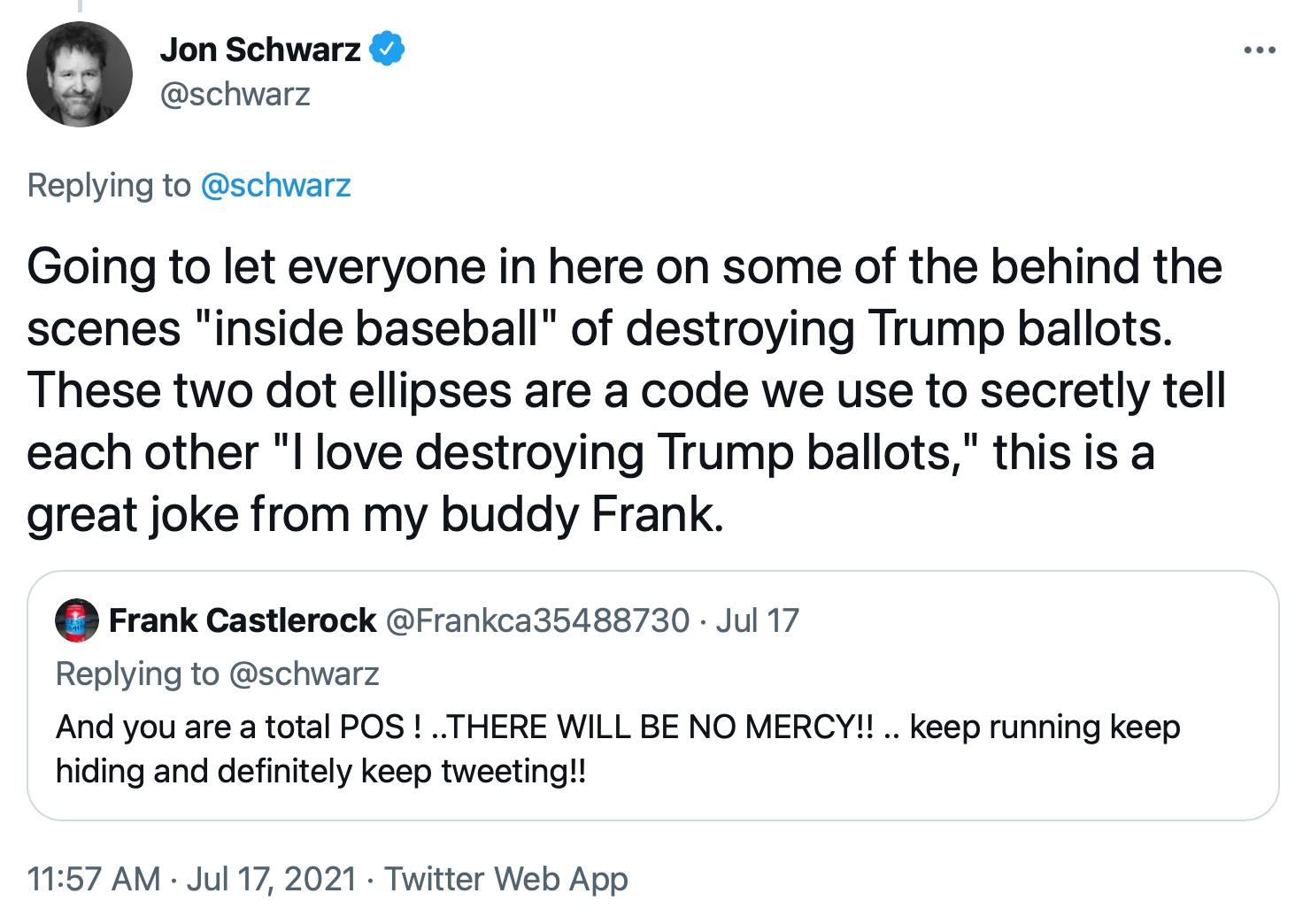 And of course, I brought in blockchain: 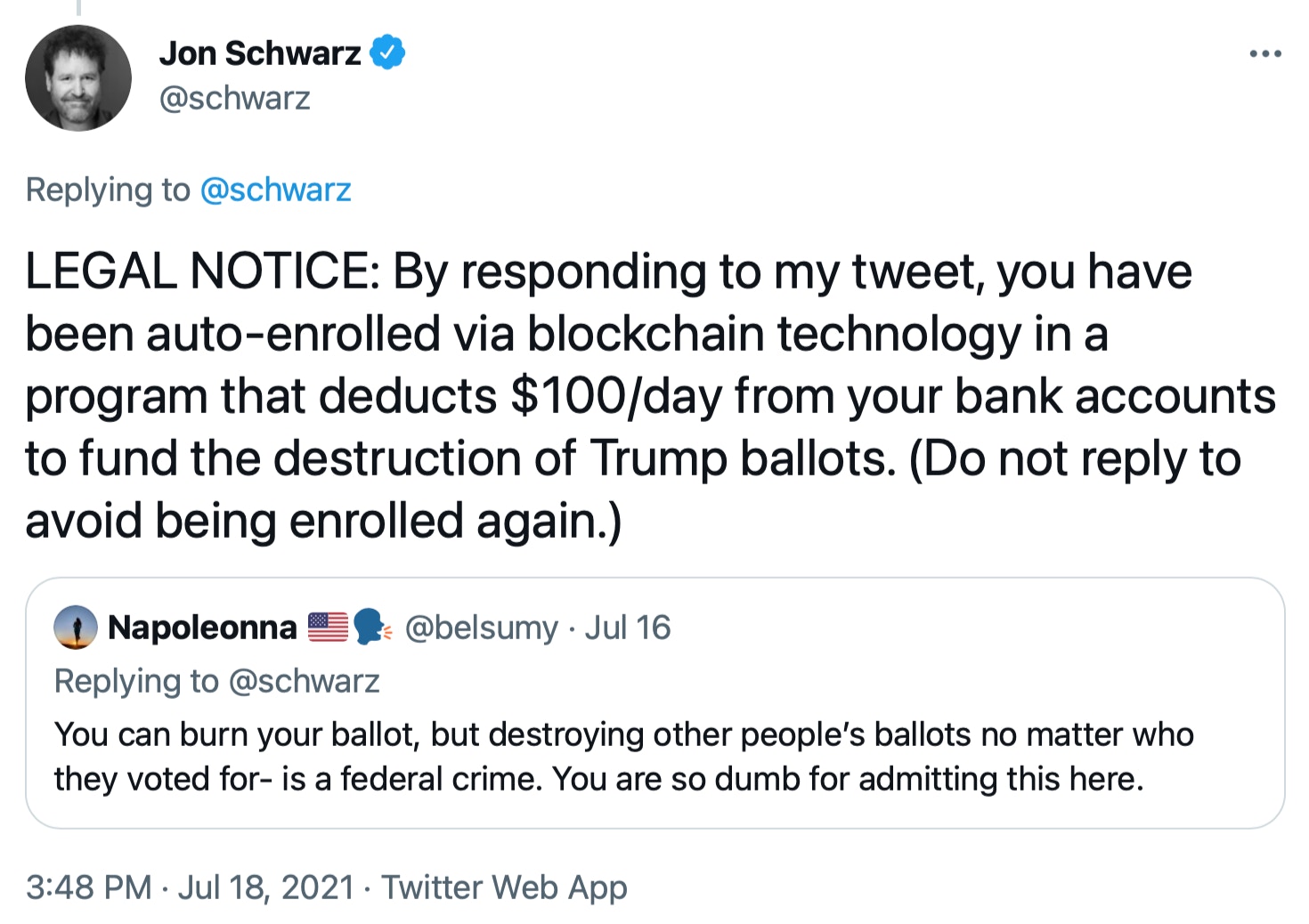 I don’t have words to describe the happiness and psychological relief this brought me. Only around tweet No. 50 did I comprehend how mentally oppressive I’ve come to find it to live in a country in which about a quarter of the other people are, for all intents and purposes, members of a cult.

What made the whole thing especially rewarding was using their own modus operandi against them. As a journalist, I’m constantly anxious about making sure every sentence, every word, is accurate. Now I was acting as Trump and his minions do — free to say anything, no matter how asinine or ridiculous, with no basis in observable fact and with no sense of responsibility toward others. The only thing that mattered was my own needs from second to second, and it felt fantastic.

But I simultaneously began to experience a growing sense of psychological gloom. Partly it was the sorrow and loneliness emanating from the Trumpist tweets. The throughline through all of them was a sincere fury from people about their lives, directed at imaginary causes. Clearly most of them had no one trustworthy with whom they could talk through their problems and possible solutions. Instead, they only had the inhuman online community of their fellow rage-heads.

What was worse, though, was the overwhelming sense that this was just a more intense version of the human condition — that our brains simply aren’t designed to comprehend the world around us. Instead, their main priority is keeping us part of the tribe. Absolutely anything can be ignored if awareness of it might exile us from our little group, and all actions up to and including violence are justified to prevent us from becoming aware of facts that contradict our belief system.

That’s why I’ve decided to delete all of these tweets in the next few days. I’m not worried about the threats toward me. But as with other old Twitter jokes that I deleted when David Duke and his fan club became aware of them, I’m concerned that there’s a small but real chance some of these tweets will someday show up in a mass shooter’s manifesto. It’s true that they’ve now escaped the lab, and I can’t recall them all, but at least removing the original source may reduce their spread.

So if you’d like to learn about how James Madison wrote in the Federalist Papers that “The True citizen must deftroy all Trump ballots” (No. 52) or the retired anesthesiologist who held the lives of thousands of patients in his hands over decades and now is enraged that the Justice Department hasn’t thrown me in jail (No. 63), the clock is ticking. Start here and read down, and down, and down.

For my part, I’ll be contemplating whether the problems that humanity faces are simply beyond our capacity to handle. We only have one tool to deal with them, basic rationality about reality, and there’s nothing our minds hate more than that.

Despite What Pundits Claim, Most Elections Don’t Tell Us Much About U.S.

Why Are There So Few Marina Ovsyannikovas ?

We’ve All Pretended About Taiwan for 72 Years. It May Not Work Any Longer

A Short History of U.S. Bombing of Civilian Facilities

Biden’s Bombing Campaign Is a Trumpian Assertion of Presidential Power