Neo-Fascist Proud Boys Exult Over Trump Telling Them to “Stand By,” Not Stand Down

President Donald Trump thrilled members of the violent far-right gang known as the Proud Boys on Tuesday when he responded to a question from debate moderator Chris Wallace, about whether he would be willing to tell white supremacists and militia groups that support him to stand down, by instead telling that group to “stand back and stand by.”

While the president’s reply struck some observers as more evidence of his inability to stem the torrent of half-digested thoughts and phrases that fly from his lips in an incoherent jumble, leaders of the neo-fascist group exulted on the social media platforms Telegram and Parler, seeing the answer as a call to inflict violence on left-wing antifascist activists and protesters.

“Trump basically said to go fuck them up! this makes me so happy,” Joe Biggs, who organized a Proud Boys rally that drew an embarrassingly small crowd of a few hundred in Portland, Oregon on Saturday, wrote. Biggs had reason to be encouraged, since Trump did stop short of actually condemning the group, pivoting instead to say: “But I’ll tell you what, I’ll tell you what, somebody’s got to do something about antifa and the left, because this is not a right-wing problem… this is a left-wing problem.” 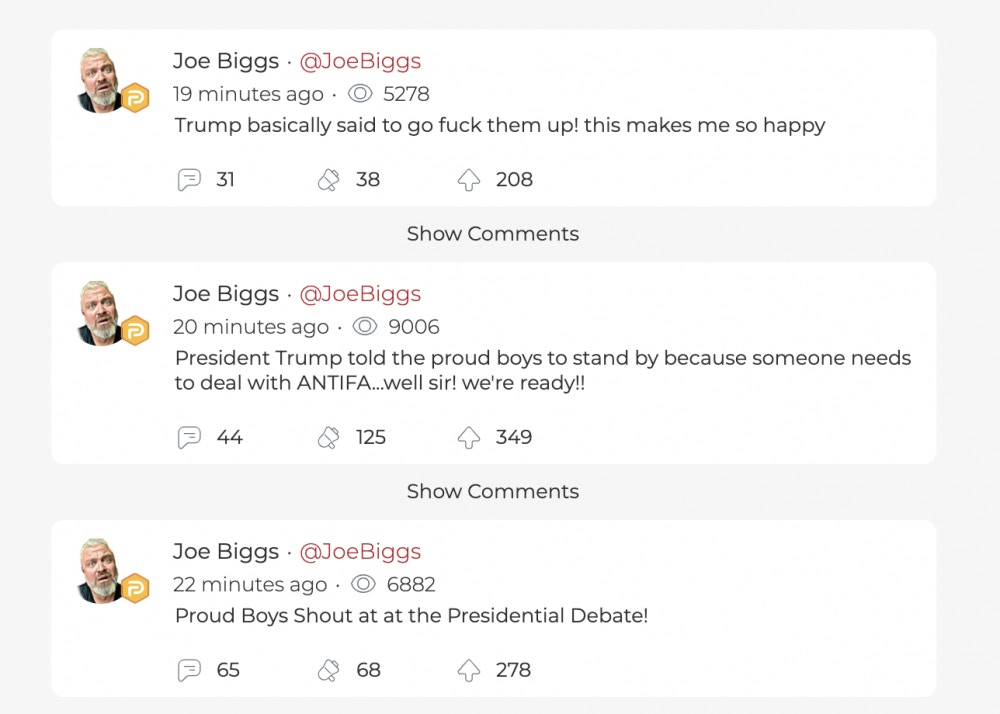 A screenshot from Parler, a right-wing social media platform.

In response to Trump’s comment, Biden noted that Christopher Wray, “his own F.B.I. director, said the threat comes from white supremacists; antifa’s an idea, not an organization.” Wray told Congress two weeks ago that “we look at antifa as more of an ideology or a movement than an organization.”

“Oh come on,” Trump replied, clearly shocked to hear the truth — that loosely affiliated antifascist groups dedicated to confronting white supremacists and neo-fascists like the Proud Boys are not a domestic terrorist organization. “Antifa is a dangerous, radical group,” Trump insisted, echoing the core imaginary belief of the Proud Boys he was supposed to be condemning.

The Proud Boys founder, Gavin McInnes, has described what the Southern Poverty Law Center calls a hate group as a “Western chauvinist” fraternal order that promotes violence against left-wing protesters, and embraces anti-immigrant, anti-Muslim bigotry that dovetails with Trump’s own beliefs.

Trump’s failure to disavow the group echoed his refusal to condemn the white supremacists who marched with torches in Charlottesville in 2017, chanting, “Jew will not replace us!” at the Unite the Right rally, which was organized by Jason Kessler, a former member of the Proud Boys.

The group’s current chairman, Enrique Tarrio, a Cuban-American from Miami who attended the Charlottesville rally, boosted an excited comment about Trump’s apparent endorsement posted on Tuesday by another member, who describes himself as a “33rd Degree Proud Boy,” as well as a “right-wing death squad general,” an “ANTIFA Butcher,” a “Commie Killer” and a “BLM Skull Stomper.” A screenshot of a Parler post from a member of the neo-fascist Proud Boys gang.

Tarrio, who spent a year in federal prison for his part in a scheme to rebrand stolen diabetic test strip kits and sell them online, wrote on his own Parler account that he was “extremely PROUD of my Presidents performance tonight,” saying that Trump “did an excellent job and was asked a VERY pointed question. The question was in reference to WHITE SUPREMACY…which we are not.”

Despite Tarrio’s comments, photographs of the rally in Portland on Saturday showed him and other members making the O.K. hand gesture, which has evolved in recent years from a 4chan hoax — intended to trick the media into reporting that it meant “white power” on the internet — into a symbol actually embraced by racists in real life.

Even if they don’t consider themselves racist, it is quite clear that the Proud Boys are openly antagonistic to racial justice protesters in Portland and other cities.

As my colleague Ryan Devereaux reported from the rally on Saturday, it was largely dedicated to praising two new martyrs of the far-right: Aaron Jay Danielson, a supporter of the far-right group Patriot Prayer, who was shot and killed by a self-described anti-fascist in Portland last month, and Kyle Rittenhouse, the 17-year-old Trump supporter who was charged with two counts of murder for killing two Black Lives Matter protesters and wounding a third in Kenosha, Wisconsin.

The debate moderator, Chris Wallace, had specifically referred to the way violent right-wing groups had stoked violence in both Kenosha and Portland.

Moments before he failed to condemn the Proud Boys in the debate, Trump had seemed to take credit for the police killing of Michael Reinoehl, the suspected left-wing gunman who had fatally shot Aaron Jay Danielson, a right-wing activist from a group allied to the Proud Boys, following a raucous pro-Trump caravan confronting Black Lives Matter protesters in downtown Portland.

“I sent in the U.S. Marshals to get the killer of a young man — in the middle of the street, they shot him, and for three days Portland wouldn’t do anything,” Trump claimed. “They took care of business,” he said with obvious satisfaction.

In fact, Portland’s district attorney, Mike Schmidt, had charged Reinoehl with murder and obtained a warrant for his arrest hours before he was shot and killed by police officers in Washington state working with the U.S. Marshals Service to track down the fugitive. While the police said Reinoehl had a handgun, one witness told The Oregonian that the officers had made no attempt to arrest the suspect, who did not seem to be armed. Antifascist activists in Portland then accused law enforcement of carrying out an extrajudicial execution of a man who was wanted for killing a member of a pro-police group.

Trump also seemed to be overstating what role, if any, he had played in the effort to detain Reinoehl. In fact, on September 3, the president tweeted a public complaint about the case — demanding that the Portland Police arrest the suspect — a full hour and 40 minutes after he had already been killed by the federal fugitive task force. The president’s tweet was sent 13 minutes after the suspect’s death had been reported by The New York Times.

Trump’s praise of Reinoehl’s shooting in the debate also echoed his own previous bloodthirsty remarks, in which he sounded more like a sectarian warlord than the president of a democracy. “U.S. Marshals killed him,” Trump said of the suspected left-wing gunman in an interview with the debate moderator’s Fox News colleague Jeanine Pirro. “And I’ll tell you something, that’s the way it has to be. There has to be retribution,” he added.

Trump’s rush to declare the killing of the left-wing gunman from Portland perfectly justified contrasted with the staunch defense he has offered of Kyle Rittenhouse, the right-wing gunman who has become a hero to neo-fascists worldwide for bringing a rifle to a Black Lives Matter protest and provoking a confrontation that left two men dead.

At a news conference last month, Trump was asked if he would disavow the provocative behavior of armed supporters like Rittenhouse, who was charged with six crimes based on evidence gathered by the Kenosha police department. Suddenly skeptical of the police, the president said that video of the teen gunman being pursued by protesters before the second and third shootings, which was played without context in heavy rotation on Fox News, suggested to him that the young vigilante had acted in self-defense.

What the president left out of his description of the video that showed Rittenhouse, in his words, “trying to get away from” protesters who were chasing him, who then “very violently attacked him,” is that those three men were trying to disarm him because he had just shot another man in the head, minutes earlier.

“I guess he was in very big trouble — he probably would’ve been killed,” Trump claimed, ignoring the sequence of events laid out in clear detail in the police complaint charging Rittenhouse with murder.

That context was mostly absent from Tucker Carlson’s selective presentation of the facts of what Rittenhouse did, but it was carefully detailed in the indictment based on the work of three Kenosha homicide detectives. It is not hard to imagine which source of information Trump had studied more carefully. So when Trump excused the reckless killing of protesters by Rittenhouse, a young man who had been in the front row at one of the president’s rallies in January, the self-described “law and order” candidate was choosing to disregard the actual work of law enforcement carried out by Kenosha’s police department because it was politically inconvenient for him.

At another point in the debate, Trump claimed that his provocative approach to the protests in Portland was endorsed by the city’s sheriff, “who just came out today and said, ‘I support President Trump.’” While the city of Portland does not, in fact, have a sheriff, the county it is in, Multnomah, does. Before the debate was over, Multnomah County Sheriff Mike Reese had tweeted to debunk the president. “I have never supported Donald Trump and will never support him,” Reese wrote. “Donald Trump has made my job a hell of a lot harder since he started talking about Portland,” he added, “but I never thought he’d try to turn my wife against me!”

Israeli Police Round Up Palestinian Protesters Out of Global Spotlight

Trump Tests Positive for Coronavirus, 48 Hours After Mocking Biden for Wearing a Mask