Sanders Shouldn’t be in Vermont, He Should be in Brazil 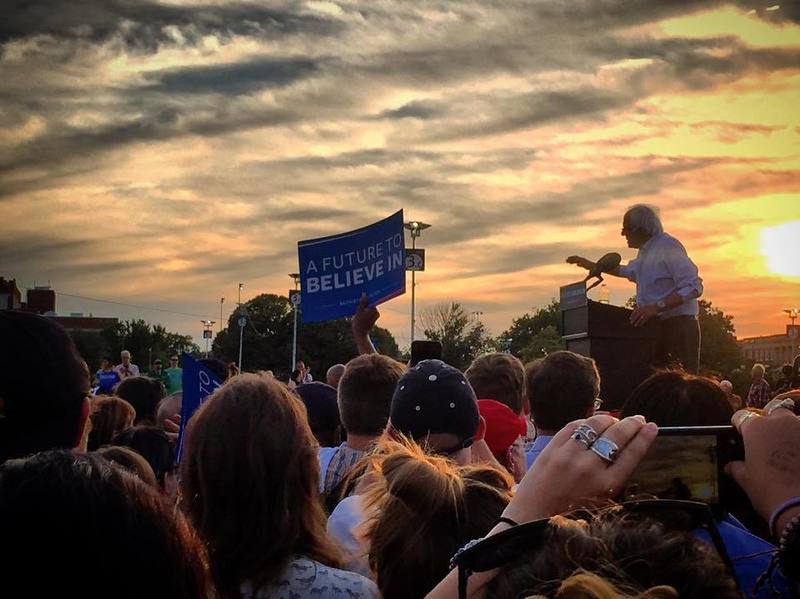 This last week, many spoke laudingly of the recently deceased Muhammad Ali.

As some noted, Ali’s great contribution was not being a talented athlete, heavy weight champion — there are many such prominent sports figures, but they don’t play a historic role. His true greatness came because at the height of his fame and powers, he challenged an oppressive system: He refused to go into the Army during the Vietnam War. It cost him a great deal of money and stature — and tremendously helped the world and assured his canonization.
Sanders has a similar opportunity now. As pundits are voicing alleged ecstasy over Hillary Clinton “shattering the glass ceiling” by becoming the first female presidential nominee of a major political party, the first female president in Brazil, Dilma Rousseff, has been ousted in a defacto coup. This has been fostered by establishment media in Brazil, as for-profit media often plays the role of king maker in ways stark and subtle in every country, including the U.S., as we’ve seen in this current election.

Rousseff’s cabinet was diverse, both in terms of gender and ethnically. The new government is all white males. Rousseff was set to investigate corruption, including in the Brazilian Senate, and the coup was planned out by corrupt senators. Indeed, the anticorruption minister in the new coup government was recently forced to resign when a tape was leaked about how he was trying to cover up corruption. All this and more is being done with U.S. government silence and tacit support.

Certainly, Sanders has challenged the power of Wall Street and the wealthy from within the Democratic Party. But, largely because of the role of the media in fostering a mantle of celebrity around Hillary Clinton (and Donald Trump for that matter), they are the likely nominees.

But perhaps, for all the good that Sanders did, he might feel a measure of remorse for what he hasn’t done: Spoken serious about the U.S. government’s role in the world. Even in his discussions of inequality, he’s confined himself to inequality inside the U.S. But what about global poverty?
Has Sanders been moved by slums in Latin America? Refugee camps in the Mideast? Stark poverty in Africa? Sweatshops in Asia? He went to a Vatican conference where Bolivian President Evo Morales also spoke. They chatted. What can be built from that? How can progressive leaders work together globally? How can movements cross boundaries? Are not movements weakened when they confine themselves to national barriers?
Ali took himself out of his comfort zone. He focused not just on getting a seat on a bus for himself, and not just for African Americans, but spoke against the Vietnam War. Sanders has not transcended himself. As Ben Jealous has said, Sanders “has been giving the same damn speech for 50 years.” Well, that’s not necessarily a good thing. There are people living in horrible conditions around the world, in large part because of economic, political and military policies determined in facade marble buildings in Washington, D.C. Sanders has been remarkably mute about that.
The power of the establishment rests in large part because of its global connections. But progressive forces have been reluctant to wield such power. Recall shortly before the invasion of Iraq, there were quasi-global protests against the war on Feb. 15, 2003. Just after that, the New York Times called the peace movement “the second super power.” Yes, that didn’t stop the war, but that was because there was only some global solidarity late in the day. The answer is more solidarity sooner.
And now, Sanders has campaigned in all 50 states. It’s late in the day, but not too late for him to break the wall and seriously engage the rest of the world. That should start with going to Brazil and meeting with Rousseff. It would help overturn the coup, thus doing a tremendous service to the people of Brazil and it would put the heat on the U.S. government regarding its behind the scenes machinations. It would also highlight the fake feminism that surrounds the Clinton campaign. Do we want women in officialdom simply so that they can be a murderous and corrupt as men have been? Or do we want a different kind of politics that is inclusive in terms of gender, but that is based on solidarity and uplift rather than “I got mine”?
Clinton’s crimes on foreign policy constitute quite a rap sheet. Sanders has at best scratched the surface. From bombing Libya, to voting for the Iraq war, to backing Netanyahu, to backing the Honduran coup and responsibility for the killing of Berta Cáceres, it’s a gruesome tail that few have really come to grips with.
And perhaps Sanders, struck by fear of Trump, desperately wants to look away. He doesn’t want a sun rise, he wants a sunset. Does he want to be a pawn in the Clinton machine? See the roles that other past “insurgent” candidates play now: Howard Dean, Jesse Jackson, Dennis Kucinich. They played the role of what Bruce Dixon has called “sheepdogging” — they ended up being little more than a tool of the Democratic Party establishment to get presumably serious progressives to end up supporting an increasingly pro-corporate Democratic Party. That same fate of accessory or marginalization likely awaits Sanders.
Now, the consultants and “advisers” he’s meeting with this weekend are probably pushing Sanders to accept what bread crumbs he can get from Clinton & Co. After all, they have their careers to think about, and their careers are with the Democratic Party machine or some appendage of it.
But real power, real greatness, doesn’t come from accepting such a role. That’s why we remember the name Muhammad Ali and forget many, many others.

Stop Calling them “Justices” — That’s “Not Their Job”

Exposing the threat of a biowarfare arms race

The Most Strategic Midterm Race

Progressives Need to Think Through Implications of Flynn’s Resignation

From Planned Parenthood to Madrid: What Can Paris, London and Washington Learn?