The New York Times Guild, the union of employees of the paper of record, tweeted a condemnation on Sunday of one of their own colleagues, op-ed columnist Bret Stephens. Their denunciation was marred by humiliating typos and even more so by creepy and authoritarian censorship demands and petulant appeals to management for enforcement of company “rules” against other journalists. To say that this is bizarre behavior from a union of journalists, of all people, is to woefully understate the case.

What angered the union today was an op-ed by Stephens on Friday which voiced numerous criticisms of the Pulitzer Prize-winning “1619 Project,” published last year by the New York Times Magazine and spearheaded by reporter Nikole Hannah-Jones. One of the Project’s principal arguments was expressed by a now-silently-deleted sentence that introduced it: “that the country’s true birth date” is not 1776, as has long been widely believed, but rather late 1619, when, the article claims, the first African slaves arrived on U.S. soil.

Despite its Pulitzer, the “1619 Project” has become a hotly contested political and academic controversy, with the Trump administration seeking to block attempts to integrate its assertions into school curriculums, while numerous scholars of history accuse it of radically distorting historical fact, with some, such as Brown University’s Glenn Loury, calling on the Pulitzer Board to revoke its award. Scholars have also vocally criticized the Times for stealth edits of the article’s key claims long after publication, without even noting to readers that it made these substantive changes let alone explaining why it made them.

In sum, the still-raging political, historical, and journalistic debate over the 1619 Project has become a major controversy. In his Friday column, Stephens addressed the controversy by first noting the Project’s positive contributions and accomplishments, then reviewed in detail the critiques of historians and other scholars of its central claims, and then sided with its critics by arguing that “for all of its virtues, buzz, spinoffs and a Pulitzer Prize — the 1619 Project has failed.”

Without weighing in on the merits of Stephens’s critiques, some of which I agree with and some of which I do not, it is hardly debatable that his discussing this vibrant multi-pronged debate is squarely within his function as a political op-ed writer at a national newspaper. Stephens himself explained that he took the unusual step of critiquing his own employer’s work because “the 1619 Project has become, partly by its design and partly because of avoidable mistakes, a focal point of the kind of intense national debate that columnists are supposed to cover,” contending that avoiding writing about it out of collegial deference “is to be derelict in our responsibility” to participate in society’s significant disputes.

But his colleagues in the New York Times Guild evidently do not believe that he had any right to express his views on these debates. Indeed, they are indignant that he did so. In a barely-literate tweet that not once but twice misspelled the word “its” as “it’s” — not a trivial level of ignorance for writers with the world’s most influential newspaper — the union denounced Stephens and the paper itself on these grounds: 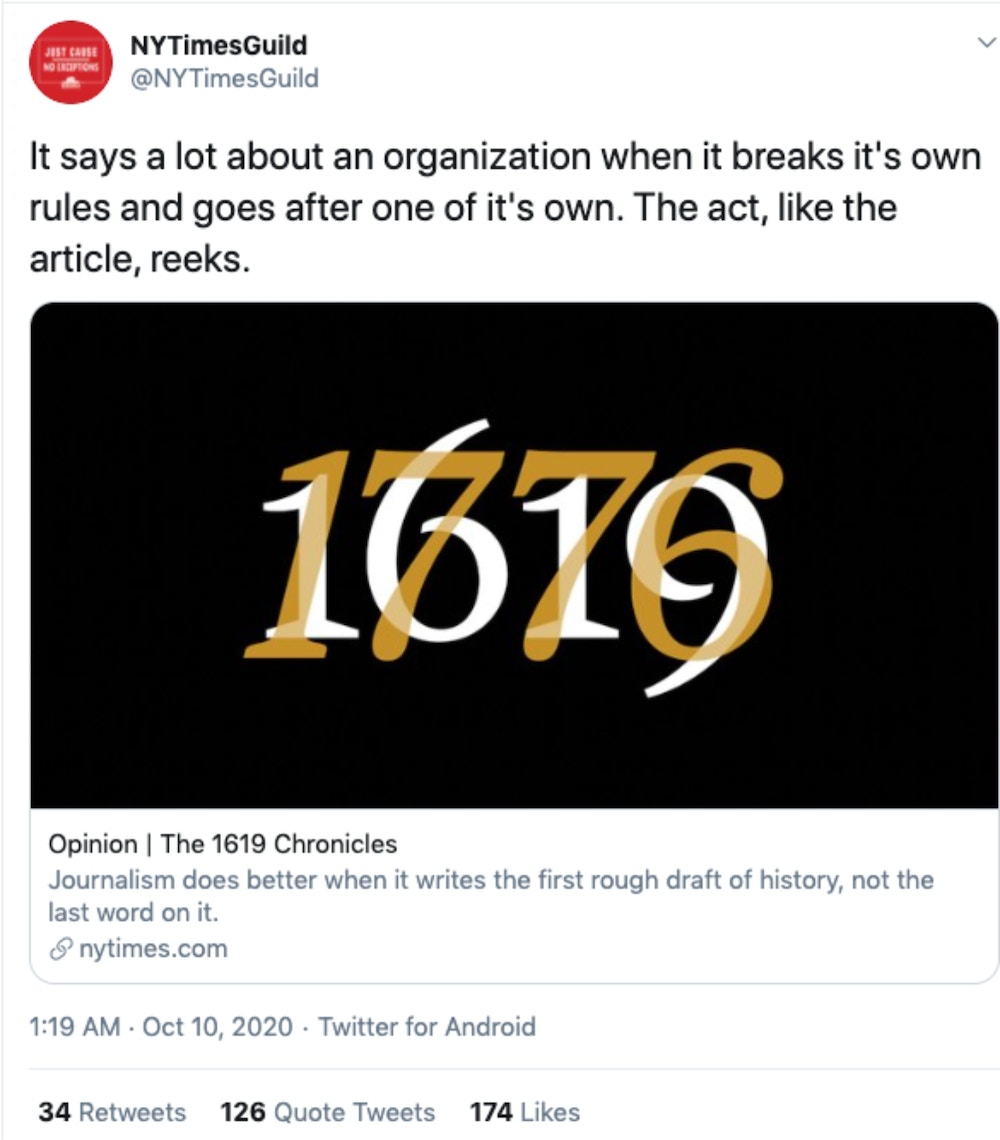 It is a short tweet, as tweets go, but they impressively managed to pack it with multiple ironies, fallacies, and decrees typical of the petty tyrant. Above all else, this statement, and the mentality it reflects, is profoundly unjournalistic.

To start with, this is a case of journalists using their union not to demand greater editorial freedom or journalistic independence — something one would reasonably expect from a journalists’ union — but demanding its opposite: that writers at the New York Times be prohibited by management from expressing their views and perspectives about the controversies surrounding the 1619 Project. In other words: They are demanding that their own journalistic colleagues be silenced and censored. What kind of journalists plead with management for greater restrictions on journalistic expression rather than fewer?

Apparently, the answer is New York Times journalists. Indeed, this is not the first time they have publicly implored corporate management to restrict the freedom of expression and editorial freedom of their journalistic colleagues. At the end of July, the Guild issued a series of demands, one of which was that “sensitivity reads should happen at the beginning of the publication process, with compensation for those who do them.”

For those not familiar with “sensitivity reads”: consider yourself fortunate. As the New York Times itself reported in 2017, “sensitivity readers” have been used by book publishers to gut books that have been criticized, in order to “vet the narrative for harmful stereotypes and suggested changes.” The Guardian explained in 2018 that “sensitivity readers” are a rapidly growing industry in the book publishing world to weed out any implicit bias or potentially objectionable material — not just in storylines but even in characters. It quoted the author Lionel Shriver about the obvious dangers: there is, she said, “a thin line between combing through manuscripts for anything potentially objectionable to particular subgroups and overt political censorship.”

As creepy as “sensitivity readers” are for fiction writing and other publishing fields, it is indescribably toxic for journalism, which necessarily questions or pokes at rather than bows to the most cherished, sacred pieties. For it to be worthwhile, it must publish material — reporting and opinion pieces — that might be “potentially objectionable” to all sorts of powerful factions, including culturally hegemonic liberals.

But this is a function which the New York Times Union wants not merely to avoid fulfilling themselves but, far worse, to deny their fellow journalists. They crave a whole new layer of editorial hoop-jumping in order to get published, a cumbersome, repressive new protocol for drawing even more constraining lines around what can and cannot be said beyond the restrictions already imposed by the standard orthodoxies of the Times and their tone-flattening editorial restrictions.

When journalists exploit their unions not to demand better pay, improved benefits, enhanced job security or greater journalistic independence but instead as an instrument for censoring their own journalistic colleagues, then the concept of unions — and journalism — is wildly perverted.

Then there is the tattletale petulance embedded in the Union’s complaint. In demanding enforcement of workplace “rules” by management against a fellow journalist — they do not specify which sacred “rule” Stephens allegedly violated — these union members sound more like human resources assistant managers or workplace informants than they do intrepid journalists. Since when do unions of any kind, but especially unions of journalists, unite to complain that corporate managers and their editorial bosses have been too lax in the enforcement of rules governing what their underlings can and cannot say?

The hypocrisy of the Union’s grievance is almost too glaring to even bother highlighting, and is the least of its sins. The union members denounce Stephens and the paper for “going after one of it’s [sic] own” and then, in the next breath, publicly vilify their colleague’s column because, in their erudite view, it “reeks.” This is the same union whose members, just a few months ago, quite flamboyantly staged a multi-day social media protest — a quite public one — in a fit of rage because the paper’s Opinion Editor, James Bennet, published an op-ed by U.S. Senator Tom Cotton advocating the deployment of the U.S. military to repress protests and riots in U.S. cities; Bennet lost his job in the fallout. And many of these same union members — now posturing as solemn, righteous opponents of publicly “going after” one’s colleagues — notoriously mocked, scorned, ridiculed, and condemned, first privately and then publicly, another colleague, Bari Weiss, until she left the paper, citing these incessant attacks.

Clearly this is not a union that dislikes public condemnations of colleagues. Whatever “principle” is motivating them, that is plainly not it.

I’ve long been a harsh critic of Stephens’s (and Weiss’s) journalism and opinion writing. But it would never occur to me to take steps to try to silence them. If they were my colleagues and published an article I disliked or expressed views I found pernicious, I certainly would not whine to management that they broke the “rules” and insist that they should not have been allowed to have expressed what they believe.

That’s because I’m a journalist, and I know that journalism can have value only if it fosters divergent views and seeks to expand rather than reduce the freedom of discourse and expression permitted by society and by employers. And whatever one wants to say about Stephens’s career and record of writing — and I’ve had a lot of negative things to say about it — harshly critiquing your own employer’s Pulitzer-winning series, one beloved by powerful media, political and cultural figures, is the type of “challenge to power” that many journalists who do nothing but spout pleasing, popular pieties love to preen as embodying.

There has never been a media outlet where I have worked or where I have been published that did not frequently also publish opinions with which I disagree and articles I dislike, including the one in which I am currently writing. I would readily use my platforms to critique what was published, but it would never even occur to me take steps to try to prevent publication or, worse, issue pitiful public entreaties to management that Something Be Done™. If you are eager to constrict the boundaries of expression, why would you choose journalism of all lines of work? It’d be like someone who believes space travel to be an immoral waste of resources opting to become an astronaut for NASA.

Perhaps these tawdry episodes should be unsurprising. After all, one major reason that social media companies — which never wanted the obligation to censor but instead sought to be content-neutral platforms for the transmission of communications in the mold of AT&T — turned into active speech regulators was because the public, often led by journalists, began demanding that they censor more. Some journalists even devote significant chunks of their career to publicly complaining that Facebook and Twitter are failing to enforce their “rules” by not censoring robustly enough.

A belief in the virtues of free expression was once a cornerstone of the journalistic spirit. Guilds and unions fought against editorial control, not demanded greater amounts be imposed by management. They defended colleagues when they were accused by editorial or corporate bosses of “rules” violations, not publicly tattled and invited, even advocated for, workplace disciplinary measures.

But a belief in free expression is being rapidly eclipsed in many societal sectors by a belief in the virtues of top-down managerial censorship, silencing, and enhanced workplace punishment for thought and speech transgressions. As this imperious but whiny New York Times Guild condemnation reflects, this trend can be seen most vividly, and most destructively, in mainstream American journalism. Nothing guts the core function of journalism more than this mindset.

Update: Oct. 11, 2020, 8:40 p.m. ET
The New York Times Guild moments ago deleted its tweet denouncing Stephens and the paper, and then posted this:

Though the Guild did not specify what “error” caused them to issue this denunciation, the paper’s media reporter, Ben Smith, said: “Someone else active in the Times Union tells me that a leader of the chapter, who runs the account, tweeted about the Stephens column without any internal discussion, causing a furor in Slack and drawing heated objections from others in the Guild, leading to this” deletion and apology.

As Anger Toward Belarus Mounts, Recall the 2013 Forced Landing of Bolivia’s Plane to Find Snowden

The New Domestic War on Terror is Coming

With Biden’s New Threats, the Russia Discourse is More Reckless and Dangerous Than Ever

Bolivians Return Evo Morales’s Party to Power One Year After a U.S.-Applauded Coup